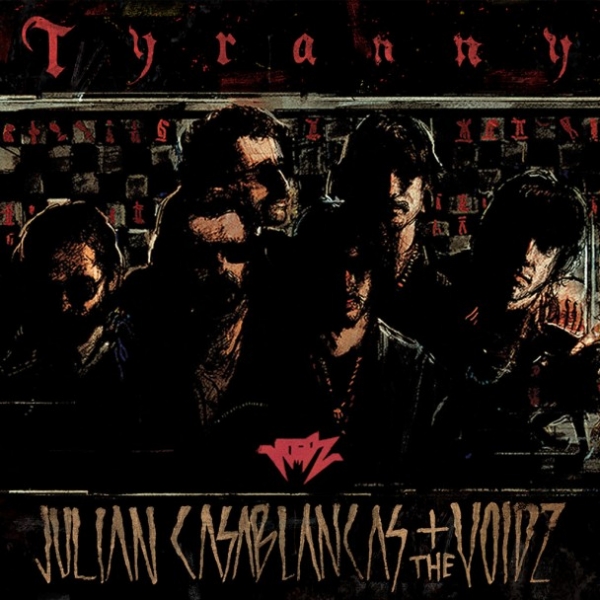 On his 2009 debut solo album, Phrazes For The Young, Julian Casablancas sang about the “4 Chords Of The Apocalypse” on a track that, while lyrically apocalyptic, fitted the “gentler Stroke” style of the rest of the record. Now, on his second solo outing (or debut with The Voidz – he’s clearly a fan of the letter ‘z’) Casablancas presents twelve songs that are seemingly post- apocalyptic, with which the band “may have travelled too far into the future for some minds” according to a recent interview. It’s certainly not a bright one. The two Strokes album in between might have been more light hearted affairs (those A-Ha likenesses weren’t too far off the mark, not that it was a bad thing) but Tyranny is neither Phrazes For The Young nor Comedown Machine; This is direct advice for the young who wish to destroy the corrupt machine.

War marches bookend the conceptual collection, with “Take Me In Your Army” an industrial, krautrock first kick, leading the fuzz and haze over a depressing skyline of scratched synthesizers, with Casablancas’ vocals meandering throughout. Instantly it’s an indication of why he had to take a step back from The Strokes; after dipping his toe into a purely Julian filtered pool with the steady ripples of Phrazes..., with this he’s cannon balled in, creating a collection that’s ten times as intriguing and unorthodox. However, while his plan was to make Tyranny “interesting and catchy”, only the former is achieved.

The standard four-minute single is ignored with “Human Sadness” and other numbers reaching up to eleven minutes in length. “Human Sadness” is a theatrical spectacle which you could easily imagine Julian taking to a stage show setting a la Damon Albarn or Billie Joe Armstrong. Lead by a tip toeing bass, and with strings shining through the dark clouds that surround the majority of the album, Casablancas’ vocal is almost operatic in places. The downside with that is, despite the operatics being performed in English, they are almost inaudible. The soft ‘80s electro of “Instant Crush” (the collaboration with Daft Punk on last year’s Random Access Memories) plays an almost non-existent influence on Tyranny, other than the fact that there is such distortion on the vocoded vocals that picking up lyrics and singing along is near impossible. But perhaps joining in and singing together would be considered dictatorial.

Hints of The Strokes lurk in the shadows of tracks including the playful "Crunch Punch" (with guitars that harmonise like ‘Under Cover Of Darkness’) and ‘Johan Von Bronx’, starring an almost free-running vocal - leaping through melodies and sprinting around solos, offering a hand to guide the listener in the opposite to obvious direction. ‘Where No Eagles Fly’ continues the theme of depression and destruction on the heaviest, most distorted moment, while the drums dominate "M.utually A.ssured D.estruction", standing and delivering something that Adam Ant may have provided himself if he’d been on something stronger.

To call the album experimental would be an understatement, and while Casablancas’ initial intention of something “interesting” is met, it doesn’t make for an easy listen. The Voidz have complimented the twice-frontman’s conceptual mind, but almost completely annulled anything “catchy” during the conflict. While "Nintendo Blood" is arcade fired with juvenile melodies and childlike colours with an explosive, electronic outro, the vocals are frustrated – but then, we’ve all been there when faced with a boss impossible to defeat. Perhaps ‘Dare I Care’ sums up Tyranny best though, a song that sounds like the original palette for the album; a stream of consciousness that highlights how where certain styles are concerned, refinery isn’t always right. Because Tyranny is a fantastically interesting idea, which doesn’t always work as an album, but could make one hell of an installation – should he ever dare to care about my opinion, and should I ever care to dare and deliver it.