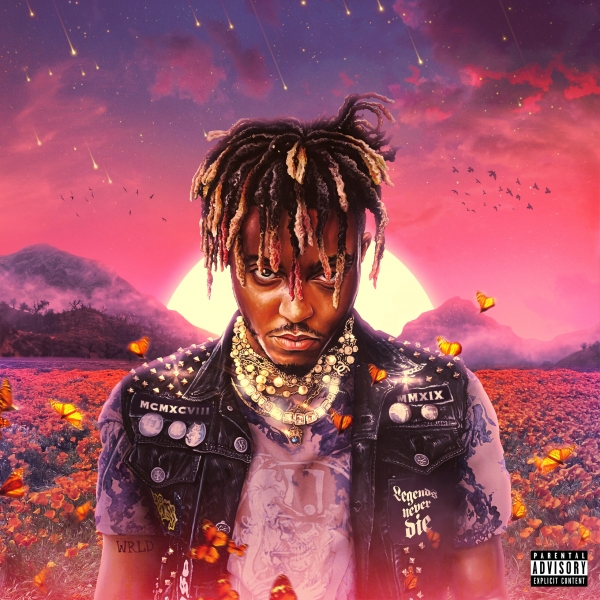 Of the Soundcloud rappers to make their way into the dizzy zeitgeist heights, Juice WRLD was one of those who fell the hardest.

Truly, Juice WRLD was an artist who felt everything; the crushing despair of realising the room is empty no matter how loud the music gets, or how a hole in the heart by a new love will always remain. This fuel for art was always going to be tortuous, but the brutal reality in the wake of his death still rings through every vulnerable heart-on-sleeve bar.

This posthumous release, intended to bring together everything Juice was working on before his death, is both a celebration and a standing document to the intricate mind he truly was, and it indeed does justice to a unique mind.

There’s always trepidation when a posthumous release is put together since the original artist has no input it never fits quite into their vision for their craft. On the aptly titled Legends Never Die, there’s certainly more production effort put in when compared to Juice’s earlier, lo-fi Soundcloud works, giving the impression that he’s arrived. Guest spots include Marshmello ("Hate The Other Side", "Come & Go") and Halsey ("Life's A Mess") and only someone with the mind of Juice can take these two pop titans and get them to fit seamlessly in his darkened corner.

The messages ring all the more poignant given the albums posthumous nature. “On my knees / I pray for a better day” on “Fighting Demons” stings, while the bookending samples of Juice’s voice from Instagram stories musing and having fun with the idea of ‘being in heaven’ impart the humanity to a burgeoning rap icon.

“Come & Go” snarls, “Man Of The Year” has a lo-fi garage-punk sound you can imagine downloading from Limewire back in the early '00s, while “Up And Away” wistfully flitters with a gently plucked guitar melody. The range of Juice may have seemed minimal once but where his next steps could’ve gone will be a mystery; it's undeniable he saw the corners he wanted to take before they'd appear. Even the interlude “The Man, The Myth, The Legend” featuring others musing on Juice’s career and talent, including his ability to “freestyle for hours” if applied to the wrong context could be seen as tacky, but here it's required testament.

The themes of dealing with success and mortality, getting to grips with knowing having money doesn’t bring happiness - the perpetual circle of looking for positivity when it just won’t come ending up in purgatory - stand out. It's due to the effortless nature of his rhythm and rhyme let the words float with direction, but it's not until you properly hone in on the syllables do you find the map unravelling, and the bigger picture coming to life that helps the poison sink in with the trap beats.

Legends never die...which is true, their legacy remains, imprinted upon the culture they helped spawn. A legacy that remains stunted is one that remains pure, and for Juice WRLD it’s one that, in the same vein as Lil Peep, continues to offer an exploration into the dark, harsh realities of the human mind, even those that might seem untouchable through dizzying social media numbers and bank accounts with more zeroes than albums. We are all human after all.