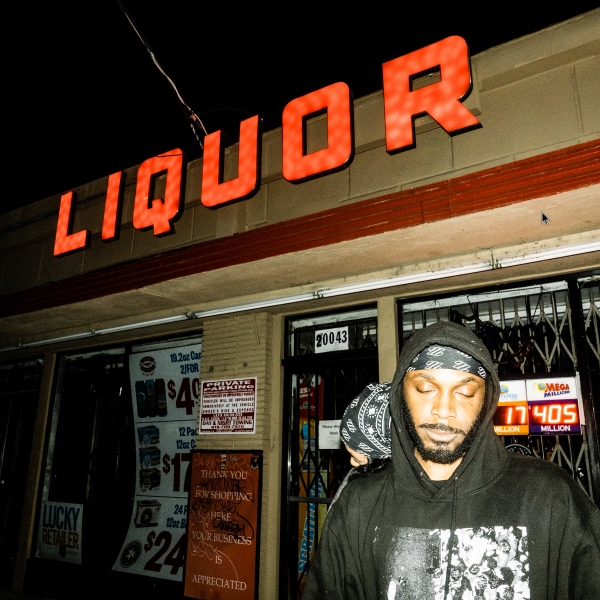 In all of his bluntness, JPEGMAFIA is a relatively obscure presence within the underground of hip-hop. However, there’s one thing made certain regarding the enraged Baltimore rapper — he’s a disruptor. He simply doesn’t give a fuck, and he’ll walk to the ends of the earth, take every possible route, and explore every avenue to make sure who he is and what he believes is as clear as day. So when large, record conglomerates try to compromise his vision and message, rest assured - with one open eye, mind you - that he’ll follow a fiery path to let the truth be known.

On the front cover of JPEGMAFIA's sarcastically-titled LP!, the rapper is depicted beneath a street light, head faced downward, clouded by a veil of smoke. This is the unwanted online version released to appease his label deal with EQT and Republic Records. But then there's the offline variant of LP!. Its cover art is similar at first glance as we encounter Peggy with a similar head-downward repose - except he's unobscured. We see him clearly, but never as clear as his unhindered rapped rage to be found within. This is the offline version - his version.

Following the release of his breakout Veteran, JPEGMAFIA experienced a run that offered a more palatable experience for the masses. But with LP!, Peggy decided he would no longer pander to what potential listeners wanted, even if he had just one record left to fulfill his contract. With his latest, lengthier offering, he's back to his brazen industrial-edged basics, engaging those who matter most—his dedicated fanbase—those who've helped get him to where he is today.

Throughout his career, JPEGMAFIA has run the gauntlet with guns blazing, strapped with ferocious bangers lambasted with bars that lay into online personalities and Redditors who think "they know him." But on LP!, he's overly cynical and more heated than ever. It pins him at his most intense, vivid, and true-to-form self. With an onslaught of angry but precise bars peltering a 20-track run of clangorous mixes, LP! witnesses its main character on a rampage, taking headshots at anyone and anything. Whether that be firing at corny "lyrical rappers'' like Logic, underground behemoths like Billy Woods and Elucid of Armand Hammer, or even the very musical execs who aim to dampen his flagrant messaging, no stone is left unturned by JPEG. But no diss is without aim or justification as he insists on opener "TRUST," he "don't talk trash (Nah), I don't say nothin' (Nah) / I just speak facts (Facts), n****s be bluffin' (Yup)?/ I won't even lie; I'm looking good."

Even on the alt-metal-indebted, AEW Wrestling-sampling "END CREDITS!," Peggy ensues to offer a foreboding message directed at anyone who stands in his way: "Bitch, I'll write a scene on your life / And I only rap out of spite / Loss is the theme of my life / After the steam and the hype, dawg." Regardless of the many hilarious and, at times, superfluous jabs that tell the brutal truth of various individuals within his sphere of influence, his objective remains unmistakable through it all: "[I} refuse to be disrespected by people who aren't respectably in the first place," JPEG explains on his Bandcamp page. It's why he decided to "leave the music industry." He wants more because, frankly, he deserves more. Heck, he made the damn record all by himself, and the results speak to his hard work and vision.

Imagine connecting the Minecraft soundtrack to a Bluetooth speaker, then throwing said speaker into a tumbling dryer — that's the sound of LP!, and it's more gripping than anything he's ever made. Full of collaged glitches and samples that sputter and splinter, Peggy again proves himself as a master of splicing and interpolating the music he loves. Whether that be presenting his crooning chipmunked rendition of Britney Spears' "Hit Me Baby One More Time" on "THOT'S PRAYER," or including a chopped and screwed sample of Just-Ice & DMX's "The Original Gangster Of Hip Hop" on the track "OG," the multi-talented rapper renders sounds from the past and present — famous or obscure — unquestionably his own.

Even with the online version trimmed to his ex-label's liking, LP! is a riveting display of hip-hop steeped in its future while also embracing all the music Peggy has consumed up until this point. But it is his version that possesses his proper signature, and truthfully, it's the only one worth writing about. His anger, bitterness, humor, and self-assuredness are filtered, not by others, but only by him. It's a director's cut that proves what happens when the "Industry... let[s] a wolf in a pig pen," he warns on the album-closing track, "UNTITLED." Now, Peggy may have managed to give Republic what they wanted, but he did so while giving them the bird and giving his fans—those who truly matter to him—what they deserve — JPEGMAFIA at his most unabashed self.