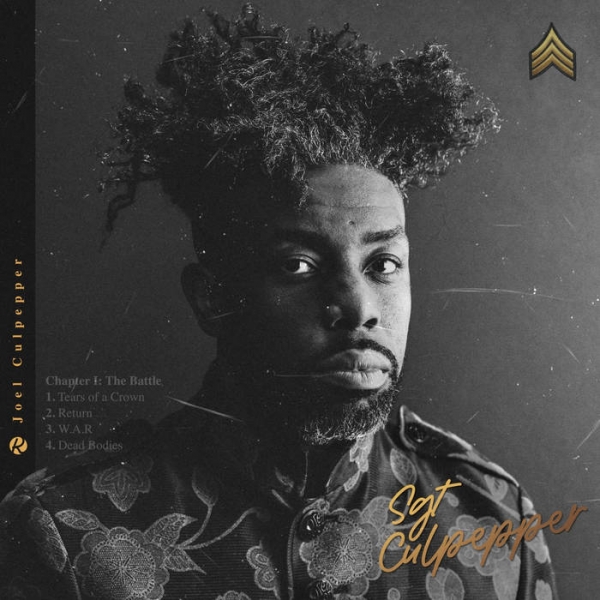 It takes extreme confidence in your abilities to reference the 1967 landmark release by The Beatles as the title of your own debut. In doing this, South East London artist Joel Culpepper is boldly stating that this is a concept album, split into four thematic segments: the battle, the surrender, the love and the lesson.

Stylistically there’s no connection to The Beatles, however there are conceptual pieces where the lineage is clear. We’re talking about the soul classics: Marvin Gaye’s What’s Going On, The Miseducation of Lauryn Hill, Sign of The Times by Prince, Hot Buttered Soul by Isaac Hayes and so on. The scope of these albums is famously far reaching, and on Sgt Culpepper we have an artist whose points of influence are crystal clear - however his retro-future soul shows his individuality as a 21st century soul singer.

The gestation period has been long. After moving to the Bronx to achieve his ambitions, he quickly realised America is not the world, and returned to the UK with a newfound confidence to follow his own path - peppering the past decade with standalone releases, the most noteworthy being a promising EP (2017’s Tortoise) in collaboration with UK producer par excellence, Swindle. Here we have the culmination of that decade’s worth of work, which respectfully shines a light on a lifetime love of music, whether it be his mother’s record collection, the gospel of church, or eschewing the sounds of his early youth for those of Curtis Mayfield.

Through the album he effortlessly switches approach. "Tears Of A Crown" is drenched with strings, congas and brass instrumentation. Featuring Culpepper musing about past battles - “No man knows my sacrifice / no one knows I gave my life / you don’t even know me” - the defiant emotion is beautifully backed by backing vocals from Maverick Sabre and Kojey Radical.

When he switches to something more boisterous, he does so with swagger; "W.A.R" is James Brown through the lens of Dirty Computer era Janelle Monae, rocking out like a forgotten soul B-Side rediscovered by Northern Soul 7” collector nerds. On "Kisses" he falsettos lusty lyrics about needing a cold shower in the morning “Cos your kisses are still here". By utilizing the sound of vocoders, Culpepper succeeds in transporting the track into the area of sleazy space-aged soul by the likes of legendary funk act Zapp - proper loosen the collar stuff.

The theme of getting down continues on the yearning "In Your Sex" which visits the sound of Elton in his '70s cocaine pomp, fusing it with the pop-soul of Ohio Players. The horns and earworm piano riff enabling a twinning with Frank Ocean’s "Super Rich Kids" from Channel Orange.

The sound on Sgt Culpepper is rich and enticing too; produced by a team headed by Swindle, with contributions from Raf Rundell, Tom Misch & Guy Chambers amongst others, it's aurally consistent and uncluttered, but also littered with intricacies. The fusion of strings and horns with xylophone and the sampling of a police chase buried in the mix gives highlight "Return" the sound of a lost Motown track, remixed through the filter of a 2021 London scene. Soundtracking Culpepper playing out the struggle between good and evil - with cocksure swagger for the latter, soaring falsetto for the former - it’s a simple switch which shows his ability to vocally act out a piece.

Elsewhere Culpepper observes communities broken through "Dead Bodies"'s urban decay, new love with "I Thought About You"'s pure pop, and relationship fuck ups on "Poetic Justice" which features the kind of vocal dexterity that only a lifetime of listening to the sweet sound of Eddie Kendricks can achieve. The summer haze of "Black Boy" is a sweet ode to a boy he taught while working as a learning mentor, closing the album with an uplifting moment of hope and joy.

Though Culpepper is the star at his own party here, every musical element is given space to shine; the liquid basslines, the jangle of guitar, the brass and strings, and the kind of stomping percussion you’d expect from a Questlove collab. Despite looking to America for influence, this is a very British sounding album. It’s the sound of the 21st Century black experience in the UK, and although its stylistically planted in the sounds of several decades, we’ve got the sound of 2021 right here.