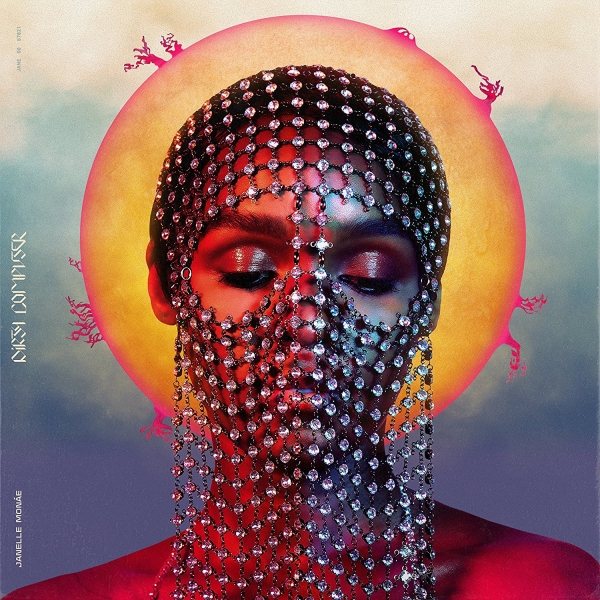 Since she burst onto the scene over a decade ago, I’ve had Janelle Monáe’s albums on constant repeat.

She’s continually visually reinvented herself, from the doe-eyed debutante of 2006 through ‘the tuxedo years’ of her debut album Archandroid to the Afropunk agitpop of Electric Lady. What’s remained constant throughout these years is a specific brand of funk-informed urgency, resulting in a suite of complexly-layered concept albums that take in everything from minimal trap-infused rap to lushly-arranged classical crescendos. Her third studio album, Dirty Computer, sees her moving in a subtly but crucially different direction.

You’ve probably encountered the lead singles from this record: “Make Me Feel”’s homage to Prince, the Kanye-esque noir rap of “Django Jane” and the soft, subversive electronica of “Pynk”. So far, so Janelle – she’s always tiptoed along the tightropes of different genres. There’s a brilliant diversity to these three records; individually they could be the lead singles from three totally different artists. “Pynk” sways easily between Kelly Clarkson-esque road trip chick flick vibes and utterly minimal Grimes-featuring choruses, while “Make Me Feel” is such a banger of a single, it’s clearly going to be all over the airwaves this summer. I actually had to flick it back to the beginning and repeat listen the first time I heard it. Four times. Every day for a week.

Away from these singles the album is still driven by Monáe's intelligent, incisive lyrics which are fuelled by politically-charged, gender-fluid, feminist beliefs (which a decade ago really marked Monáe out as a ‘woke’ musician, before the concept of ‘woke’ spawned a million memes). Here the vibe is less realpolitik and more sexual liberation, hence the switch in tone of the record. Monáe’s music has always included a deeply romantic element (as proved by some truly beautiful songs like “Say You’ll Go”, “PrimeTime”, and “Can’t Live Without Your Love”, this theme has always played second fiddle.

Dirty Computer is slower, softer, more chilled, more vulnerable. “So Afraid” touches on this; is it a meditation on the uncertain future of the world, or on Monáe’s confidence about who she is? Or even a future without her mentor – and collaborator on this record – Prince? The hazy opener is co-penned with Brian Wilson, and something of that California sound permeates through this record, touching on Frank Ocean at times, but without the weirdness.

Elsewhere, some of the tracks verge on the banal: “Crazy Classic Life” is a classic mid-set ‘toilet break’ track, seemingly ideal for Coachella stoners, while “Screwed” (featuring none other than Zoe Kravitz) is a nihilistic ode to sex that’s somehow oddly sexless. Closing track “Americans” feels slightly like it was designed to play over graduation ceremonies, but lacks the appeal or soul of some of her previous stuff – even though the lyrics are (mostly) on point.

Pharrell-featuring track “I Got That Juice” is unsurprisingly brilliant, a dirty reggaeton-lite tune with epic call-and-response lines; another future classic from this record. “Don’t Judge Me” fuses Monáe’s phenomenal use of strings and romance for easily the sexiest track here, that’s somehow still never cheesy; the vulnerability of the lyrics “Don’t judge me / I know I got issues / but they drown when I kiss you” gives this a spine-tingling relatability that the soapy slowjamz only accentuate.

What held together the sounds from her previous records for me were the classical segments, the overarching concepts, the storytelling and the interludes between songs (admittedly these aren’t enormously popular or easily translatable to a live show), which are completely removed here. Given the switch in tone, it feels like Monae is more comfortable in her skin and her sound, but is this a good thing for the music? Who can tell, but I cannot wait to be listening to this for the next 10 years.