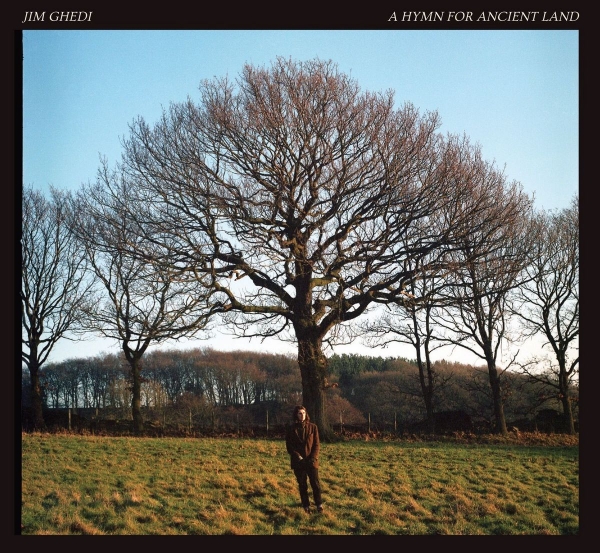 Poetry, painting: nature has long been a fertile source of inspiration for artists. The link between music and nature isn’t necessarily quite as obvious. Inspired by long rambles through the woodlands around the guitarist’s home in Moss Valley (near to where Derbyshire turns to South Yorkshire), Jim Ghedi’s often startlingly beautiful second album seeks to rectify the situation.

There's little doubt you're dealing with folk music when a song - the majestic and moving "Fortingall Yew", inspired by a 2,000+ year old senior tree located near Perth in Scotland - is dedicated to the oldest known living tree in the UK. Whilst Ghedi started out as a self-confessed Bert Jansch tribute act, there are few traces of adhering to the steadfast traditions of British folk music on A Hymn for Ancient Land, though.

Ghedi's debut presented a fairly conventional solo guitar virtuoso, albeit a diverse one, with a globe-trotting range of reference points. On this follow-up, the focus has shifted from nimble displays of dextrous finger-picking to ambitious, multi-part compositions that are typically rooted in hushed, minimalist beginnings for Ghedi’s six- and twelve-string guitar before gradually picking up expansive momentum as more instruments - double bass, cello and violin feature prominently - enter the frame. The results are frequently highly evocative of the locations and sights Ghedi's inspired by: for example, the closing open chords of the aforementioned, seriously beautiful epic "Fortingall Yew" bring to mind sparkling images of a forest sunrise.

It's possibly telling that the album only fails to fully convince when the focus shifts to man-built environs. Based on the only surviving fragment of a poem by scythe worker Joseph Rippon, "Phoenix Works" is a typically (i.e. overly) stern addition to the vast catalogue of industrial worksongs detailing the gradual erosion of traditional industries that provided the foci for remote communities. The only other song to feature Ghedi's vocals proves a highpoint. Based on the lyrics to a traditional Irish gypsy tune, "Banks of Mulroy Bay" is a gracefully executed exile's lament; it's a shame that this piano-led take – haunting as it is - proves considerably more polite than the roaring, harmonium-driven drone the song blooms into live.

There are some precursors to A Hymn to Ancient Land: the more recent instrumental guitar compositions by Michael Chapman have also successfully sought to evoke spots of natural beauty, emphasising resonant melodies and chord progressions over outbreaks of technical excellence. Ghedi can clearly play a million miles a minute, but he's much more preoccupied with inserting the maximum amount of feeling and emotional resonance to each chord, melody and phrase. There are occasional nods to the bucolic, swooning string arrangements on the first two Nick Drake records, and the ghosts of various past giants of folk/blues/roots guitar can't help but hover over the proceedings. However, the melancholy majesty and sense of contemplative awe that permeates much of A Hymn for Ancient Land – which deserves to replicate the recent success of Ghedi’s Basin Rock label mates Nadia Reid and Julie Byrne - really only sound like itself.