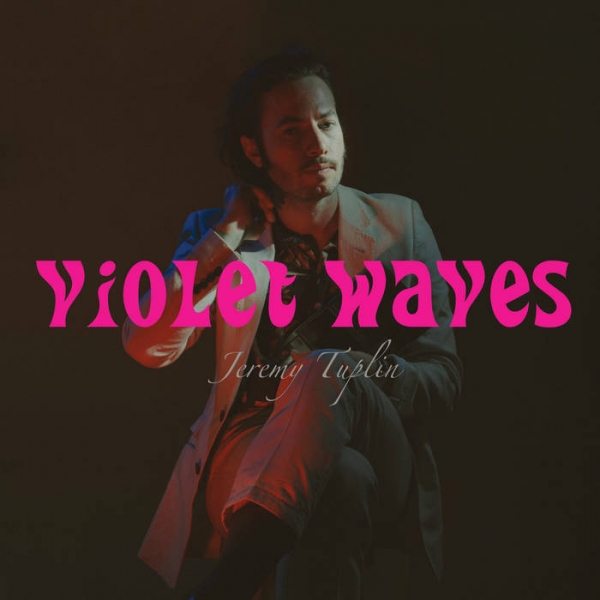 Second album syndrome doesn’t really exist when you’re actually on your third album, does it? Jeremy Tuplin’s label debut last year, Pink Mirror, was so good that its own regenerative DIY qualities could’ve done all but erase a steady lot of legwork on the underground gig circuit until that moment.

Its reference points were broad, sonically redolent of Lambchop, swallowed whole by Bowie and spat out in the discount DVD aisle next to the Mighty Boosh and Flight of the Concords, like a space ranger ready and waiting for anyone lucky enough to accidentally pick it up and embark on its absurdist voyage.

His third full-length proper, and second on Trapped Animal Records, burrows back to his space-folk debut as its celestial sister piece. Whichever way you look at it, there’s an elaborated fresh-faced charm singing such intergalactic prophecies as “I dreamt I was an astronaut” in a room 20-feet below the Farringdon overground. Violet Waves is less about the actual dreams, and more the itinerary for when we all arrive with him in zero gravity. Tuplin’s cosmic narratives weave genuine psych-folk wonder and mundanity together with intoxicating ease; while the pressure feels different on our ears, if we settle on a planet one hundred kilometers away, we’ll still just be fighting over the television remote.

There are bigger moments than we’ve heard on Tuplin’s records before. Even just the singles, "Break Your Heart Again" and "Space Magic", carry the timeless lo-fi ease and anthemic outlines of The Cribs at poetry class, or Bill Callahan on shrooms. From the surreal to the devastating, "Killer Killer" is a broken love story between a porcupine and a chinchilla (spoiler: never put your trust in a porcupine), whereas ‘Sally’s in a Coma’ eulogises a woman who crashed whilst driving on her phone, the misquoted tabloid tributes and strange methods of remembrance.

Every other line is quotable, focusing in on the small scale of the big mystery; Violet Waves is the residential village on the proverbial space-landing. It’s brilliantly straightforward, just like space. It’s drenched in reverb, just like space. It’s occasionally fixated on fashion, just as you might be in space. None of these things are true, of course. A listen to Violet Waves is a listen to Kevin Parker reciting the Hitchhiker’s Guide to the Galaxy. “Does this sound like some kind of a joke to you?” he sings on "The Idiot". Strangely enough, no. Absolutely not.