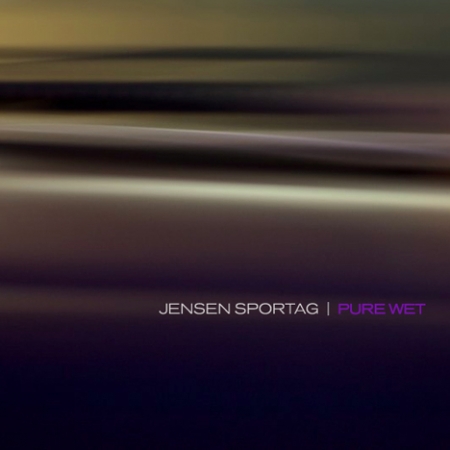 There are too many electronic subgenres. It is that simple. I may be going old-man-in-slippers-with-pipe again, but some of the preposterous names that are thrown out nowadays have become too much. That sounds even worse when this writer in question has been parlay to doing it himself (not to mention referring to himself in the third person – wow!), but it’s time for us all to calm down and appreciate a whole. No segregation, no stylistics. Just a whole of things that are good.

That all sounds very Charlie Sheen – but it’s the truth. Sometimes music can just stop you in your tracks for being unfathomably infectious without a need to be thrown in amongst an ocean of throwaway catchphrases and attempts to cut through to the next thing. Jensen Sportag‘s Pure Wet EP is that very essence, as it is (he says bravely) one of the most immense pieces of pop genius to hit these ears in a long time.

Now – when speaking from a personal reference to that word ‘pop’ – there should be numerous angles to consider, so we’ll have to go step-by-step, slowly but surely into this fevered ego. Firstly, there is not a melody on here that is forgettable – key ingredient for start. They each stand the test of time in their own brilliant immediacy and bombast. Prime case in point being three quarters of the way through in the form of ‘Everything Good’, which dons a mink throw of a bassline to the most decadent pool-party of your dreams. The sort of party you would never actually go to, but stare with a glint in your eye from afar at, thinking of just how amazing it would be. Throw in an Off The Wall style vocal hook and the infectiousness of the track could so easily have become meme worthy in it’s own right, sitting alongside Mr. Sheen in it’s wanton and joyous hedonism.

Secondly then, and just as vital to Jensen Sportag’s sound, is the incorporation of homage, perfectly encapsulated in closing track ‘Jareaux’. It moves with the sort of funk-laden groove that (dare I say it) Hall and Oates were so adored for – and to further that kind of reference by saying that this is not to their disadvantage just proves what a feat this kind of loving recreation of sound is.

But it’s not just artistic homage present here – the meticulous derivation of the epoque they grew up in coarses through with so many cultural references that it has a generational grip on so many other peers. Naming themselves after a simulated Danish player to start may be enough, but it is their onus on classic 80s techniques and (at the time) modern progressive sounds that stays longest. ‘Mapquest’ smoothly opens with a lounge-style beat before snapping in with yet another outrageous bass lick before enveloping itself in an amazingly seductive guitar lick come the end. Even opener and title track, ‘Pure Wet’, the EP’s most downtempo moment, is scattered with enough pearls of electronic purity and almost combative melody to act as a perfect foil to the saccharine beast that follows it.

Finally then is the lack of fear that is so pre-eminent here. It is vital to the ‘pop’ landscape to stay honest and interesting enough for a bigger audience to become exposed to you – whether you’re sitting pretty underground or flying high over it. And even in this four track morsel, Jensen Sportag have displayed enough confidence and grandeur in sound to make at least this reviewer believe that all hope is not lost yet for the greatness that can be music.