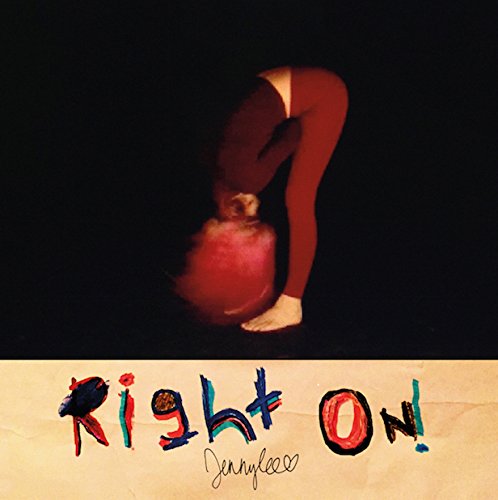 jennylee is more commonly known as Jenny Lee Lindberg, the bass player in Warpaint. With her solo album right on! she plays around with the sound of her alma mater, taking it to both mellower and more frenetic places.

Like the name jennylee, all the song titles are united in their absence of capital letters, which fits with the records understated feel. As you’d expect from a member of Warpaint, it’s not showy or brash but instead contemplative, almost meditative for the most part. Stylistically, she mines 80s new wave bands for inspiration, and arguably 70s disco too, such is the groove of the bass in places.

The first two songs here set up the two distinct musical styles she embraces on right on! which shift from the stripped-down to the more recognizable expansive sound of Warpaint. The opening “blind” fits the former category; with her wonderful bass playing providing the center-point. It’s slow and undulating with long drawn out vocal lines introducing her singing voice.

In Warpaint Lindberg helps to create panoramic songs such as “Elephants”, which seemingly had five different musical ideas stitched together, yet miraculously sounded coherent. But on right on! she mines the bands more rhythmical side of a song like "Disco/Very". Accordingly, the intensity of second song “boom boom” is more familiar terrain, with a glorious funk bass and urgent yet spacey vocals that could be her bandmates Emily Kokal and Theresa Wayman singing.

She’s hasn’t entirely disconnected with Warpaint for her solo venture however and is joined by Stella Mozgawa, who adds her signature intricate drumming on some songs. With Mozgawa having also played on the forthcoming Cate Le Bon record, Warpaint’s rhythm section isn’t resting on their laurels whilst the band takes a hiatus.

The new wave influence is most pronounced on recent single “never”, which could be New Order’s “Procession” with Kim Deal on vocals and The Cure’s Robert Smith on guitar. It’s the best of the higher tempo songs, possessing an infectious energy which contrasts nicely with the records slower, starker moments. As with Warpaint, the lyrics are opaque, more suggestive of a mood than a linear story and the mood of “never” sounds like one of frustration and disappointment.

But that’s not to say the musical atmosphere is downbeat. “riot” is startlingly disorientating. With distorted bass and tribal drumming jennylee chants lines such as “You’ve got fire in your eyes” like a mantra over the rhythm and the climax has someone screaming in the background.

The slower songs offer a newer side to jennylee. Whilst “long lonely winter” feels like a more somnambulant take on her bands “Undertow”, with its similarly restrained feel it ticks the box of the dreamy and hazy mood she was looking for, as does the lovely “he fresh”, which is the most loved up song here.

The highlight of the restrained songs is the closing “real life”. It features just her voice and an acoustic guitar and coming back to the Kim Deal link, it has a similar feel to “Silver” from The Pixies’ Doolittle. It’s right on!’s sparsest song and also its most melancholy, with a very bittersweet lyric - the line “Now don’t you forget her” is a heartbreaker.

There’s something about Warpaint that makes them more than the sum of their parts, so it was always going to be difficult for one of them reach similarly giddy heights on a solo record. right on! might not be as entrancing as a Warpaint album, but it doesn’t aim to be. It’s a record that’s full of interesting ideas that needs a few listens to appreciate its subtleties, which are ultimately very rewarding.