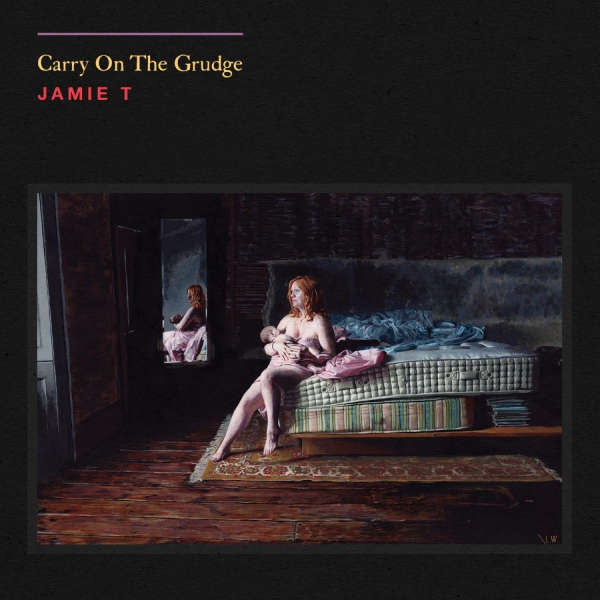 Cor blimey Mr. T (not that one), you don’t half keep us on tenterhooks.

Five stinkin' years have passed since Kings & Queens, a frighteningly lauded LP that spawned radio and indie-disco staples such as “Sticks 'n' Stones” (“Running with the beavers/no time for lemur...”). When details began to pour in about the possibility of a long-awaited third full-length from Jamie T, such was the cynicism that followed half a decade of silence, it was met partly with disbelief. But, here we are, on the precipice of that follow-up: Carry On The Grudge.

While many singer-songwriters and indie-rock wannabes have come and gone over the years, Jamie T has pervaded the zeitgeist's consciousness. This is mostly because of his thoroughly silvered tongue and canny knack for storytelling; like a modern-day Shakespeare raised in the greying sprawl of Croydon (though T's actually a Wimbledon lad), Jamie T sings the songs of the common people. It's a unifying folk music – not timbre-wise, but in terms of speaking to and about the problems of the masses and the downtrodden. There's an honourable streak in his vagabond ways; will he grow up to be Billy Bragg Jr.?

He's not always galvanising the proletariat, and often careens off to the misanthropic luxury of youth and drugs and booze and general pissed-offishness, but there's a statement of intention. This isn't a cookie-cutter boy + guitar with a massive gob and financial backing. T could be that singer from down your local. Therein lies his charm.

Carry On The Grudge could so easily buckle under the weight of expectation. As it is, it feels like the most natural of follow-ups.

Jamie T has evidently matured in leaps and bounds. Once a fresh-faced, cheeky lout pecking above his station, T now looks down, beyond and across the expanse of life and London. He's grizzled, 5 O'clock shadow audible, musing with a blank PTSD-stare. He's surveyed the world with disdain and disillusionment, and grown out of the world he once felt the crown prince of. There's a loss of identity. It's an album rooted in the past, and though there's a sense that T is lost, it's not like his music is. It's about moving on too far and being stuck away from home; there's a resonating adult quality to it. This is the album version of going away to uni and returning to your hometown but all your friends have moved away, had kids or died. Everything's the same, but nothing is.

Now, very much isolated and detached from Panic Prevention, Jamie T shows far more than he ever did. Carry On The Grudge is remarkably open – T was never hesitant about saying anything, but he would rather cloud the truth with chest-pumping and grisly tales of intoxication and violence. This time, he's candid to the point of no return.

“Don't You Find”, his comeback cut, slowly emerging as a chilling lovelorn crisis, ramps up like grandiose post-rock. It's a cavalcade of strings, echoing howls and a volatile T on the verge of doing something stupidly reckless. “Zombie” is frightening. It sounds like classic T – bolshy Specials-esque riffs, massive indie-pop aggro – but it's genuinely shiver-up-the-spine. Fraught with reality, T belts: “I got blood shot eyes, and there's blood in my teeth/I got a ripped up jacket and a friend who's a thief/well I'm a-coughing out my mouth, trying to pull it out/but the fire inside keeps burning, burning out.” This is the song of a young man realising his mortality.

The hardcore blues of “Peter” is again plump with dread. It snarls, grimaces and gurns. “Rabbit Hole” is a melange of axe fury. It's a bit ska-ier, lurching on the offbeat, but even when T returns to his 'good old self', it's tarnished with the power of hindsight.

Mostly though, Carry On The Grudge is home to slow-burning paeans about long-dead love and the regret of missing chances. It's folk, almost. “Mary Lee” is a world-weary ode, mourning childhood sweethearts and the bliss of innocence: “we were thick as thieves, hearts on sleeves, searching for memories/blowing off steam, just seventeen, forgetting where we'd been/so I took a tip from my ma, a tip from my pa/and walked around my dreams/found in a car driving far/away from places I've seen.”

This is worth the wait. Jamie T still displays a talent for immense melody, poignant lyricism and an intuitive eye on the human condition. No longer is he roaming the streets with his best buds, drinking Bud and smoking bud, looking for a fight and a fuck. He left doe-eyed and with a fiery passion; he returns spurned, destitute and more than a little numb, but with no other place to call home. With that, he remains, as ever, the perfect everyman.