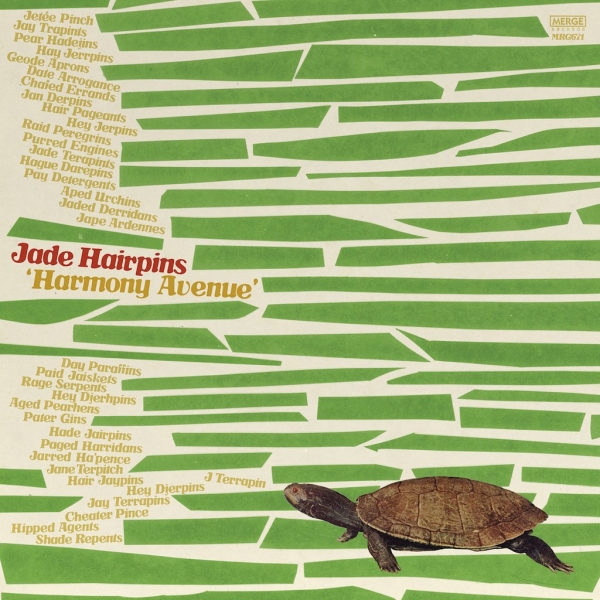 Jade Hairpins first crept onto the scene in 2018 with the release of a mysterious 12-inch on Merge Records.

There were no further details about the band available online, but the label were curiously promoting the latest Fucked Up record released on the same day. Now the band – made up of Jonah Falco and Mike Haliechuk of Fucked Up – are ready to claim their name with debut album Harmony Avenue. The band deal in wonky power-pop and post-punk, all braying guitars and off-hand lyricisms which embody both characters of the band's creation as well as their own personal rhetoric.

The effect is an album which sounds sort of like the soundtrack to an '80s coming-of-age film – it's scrappy but with a polished, curated sheen. Influences from Talking Heads to New Order can be heard all over the record, the band managing to bring it all neatly up to date without taking on the current '80s-pop throwback trend too heavy-handedly. Bubbling synths and guitar flourishes can be heard on the propulsive "Post No Bill" with its declarations of "if it feels good / I will", whilst the meandering "Dolly Dream" sees the band grappling with parts of themselves they thought long gone: "I can't ask a question if I'm afraid of the answer / it's true I can't go out tonight / for I'm afraid I'm not a dancer."

The album does have a tendency to veer towards overwhelming, with no respite from the barrage of sounds that are constantly firing. At times the fight for space between vocals and instruments can make you wince – a sparser sounding track would have been very welcome within the tracklist, with even the most restrained track "Yesterdang" still relying on stadium-ready guitar tones throughout. It's a deft endeavour in making an album that speaks to the most bombastic music of the past, and it's an enjoyable listen – just be wary of ear fatigue.