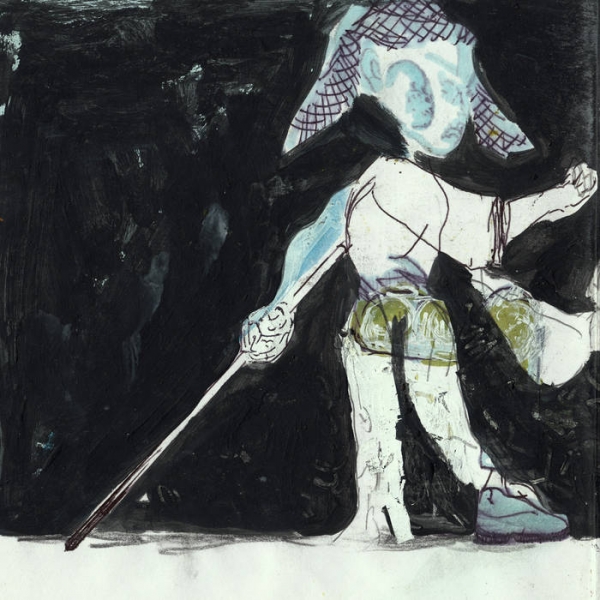 Now based in Glasgow after a tenure in Manchester, that Rickenbacker chime prevalent across the Glaswegian indie landscape has infiltrated his blend of psychedelic soup on album four.

Embarrassed Landscape is perhaps Stevens' most realized work to date under the moniker Irma Vep. Written over three years, after an aborted attempt two years prior, it was finally recorded in just a couple of days in Glasgow.

This short amount of time in the studio has resulted in an anxious 'fuck it' kind of spontaneity, murky lo-fi execution entices the ears to lean in a little further, which at times are pummeled with lysergic death-pop. The ambitious, freeform of "King Kong", a swirling ten minutes of nu-psych jamming which anxiously builds into a glorious mess of paranoia and additional guitar from Manchester' artrock visionary Kiran Leonard, is ambitious and purposefully messy and is as thrilling an album opener can get.

The Byrdsian chime of "I Do What I Want" starts simply enough with nagging earworm guitar hooks repeated over and over, before droning guitars and harsh violins are smashed over the top in a move reminiscent of The Velvet Underground at their most uncompromising and confrontational. The metronomic approach taken on "Not Even" is a punky assault on the senses, and one proggy keyboard riff away from being in Oh Sees territory.

Although never far from the potential for another attack of apocalyptic raggedness, there are also moments of yearning tenderness where Stevens replaces his distant rage-fueled vocals for something much less tortured: "Disaster" comes from the same place as late eighties indie ballads by the likes of The Monochrome Set, "Tears Are The Sweetest Sauce" fuses country balladry with lethargic lullabies, while the cheap as chips sounding "Purring", just heavily reverbed vocals and guitar chime is a sweet sounding moment of desolate tenderness with economic minimalism. Where many points of the album are crammed full of detail and noise, stripping right back to basics prove to be simple, but effective moments.

This is a nervy, tense affair with British psychedelia running through its veins. Whether it's the Rubble compilations which showcased forgotten sixties acts, or proto-shoegaze bands channeling those sounds through the prism of chaotic noise such as Loop, The Telescopes, or Spacemen 3, on Embarrassed Landscape Irma Vep is well on the way to proving their worth amongst such luminaries.