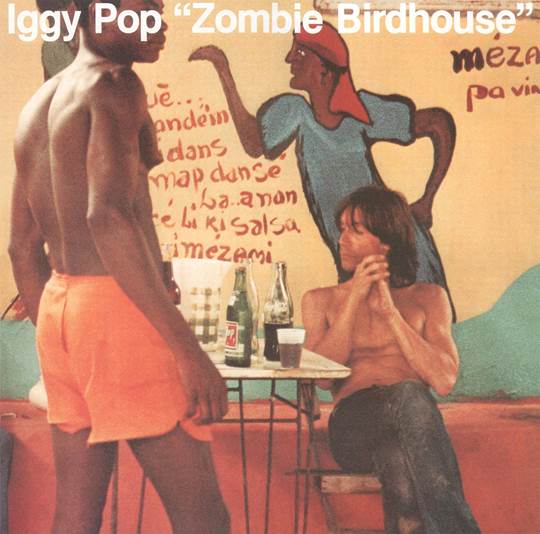 Artists that make it past their first ten albums always have at least one record that makes fans shudder.

David Bowie had at least three divisive records – and that’s not counting his experiments in Tin Machine. Lou Reed probably had more misses than hits. Bob Dylan continues to release records that split his fanbase.

Iggy Pop, fire-breathing trickster god of gutters and glitter, has one particular album that stands out as ‘troublesome’. While Zombie Birdhouse isn’t as overcooked or overstuffed as the mostly woeful Skull Ring, or as cloying as misjudged heavy metal experiment Brick by Brick, it certainly is his most contentious album, and this reissue only serves to bewilder, confuse and infuriate listeners once more.

Before 1982, everything the man touched was golden. People may not have realised it at the time, but Soldier and Party and New Values were incredible, hook-saturated new wave records, with tonnes of personality and more lyrical zingers than you could shake a stick at. Iggy was on fire. From the first Stooges album in 1969, to Party in 1981, the man born James Newell Osterberg Jr. produced – with his bandmates and collaborators like David Bowie, Ivan Kral and Glen Matlock – an unbroken string of truly incredible records: Foremost amongst them were The Idiot and Lust for Life in 1977, both written (for the most part) by David Bowie, and the legendary rock masterpieces Fun House and Raw Power (both with differing iterations of The Stooges). If you haven’t heard any of those, do yourself a favour.

By the end of 1981, however, he was a lost cause. Iggy was longer in David Bowie’s entourage, no longer in Berlin, no longer in any kind of band, no longer moving forward with any purpose or with any sense of direction. Knowing that he was much better when working with a creative foil, Iggy turned to Blondie’s Chris Stein (and Clem Burke, who had just finished drumming on the Eurythmics’ debut) to dig him out of his hole. Stein probably couldn’t believe his luck.

Released on Stein’s Animal label in 1982, Zombie Birdhouse is an absolutely delicious car-crash of a record, all twisted metal and noxious fumes. It’s undoubtedly the noblest kind of failure, the result of two drug-damaged, burned-out rock ‘n’ roll casualties turning to a mediocre songwriter to cook up a set of classics. It was never going to work out exactly how they wanted, but it does almost work out. Rob Duprey, who wrote most of the material on Zombie Birdhouse, is no David Bowie, although he tries his best, despite the hair-brained proclivities of the artists he was working with.

What’s most frustrating about Zombie Birdhouse is how close it is to being a fantastic record. It’s agonisingly close. Most songs only needed one or two more passes to turn them around. There are heavily processed beats drawn from Latin and Afrobeat rhythms, roaring synth drones, chiming guitars and ominous piano chords – in addition to the dependably hilarious lyrics, but there’s a distinct lack of flavour... There’s nothing that makes Zombie Birdhouse an essential Iggy set, except for it’s wonderful sleeve art and couldn’t-make-it-up trash-bag sound.

“Run Like a Villain” begins like a Suicide track, but quickly morphs into tightly-wound, sinister sleazeball rock, which is a running theme throughout the album. The sense of creeping dread pervading the track is palpable – it feels like Iggy is on a mission, his eyes trained intently on your back. The guitars buzz and growl, Iggy screeches and yowls – Hell, he even gets down in Beefheart territory at times. Burke’s drums, which were flat as a tortilla on the original, are only marginally richer on the reissue, which is a shame.

Album highlight “The Villagers” follows. It has an undeniable groove carried over from Iggy’s swingingest New Values days, with phoned-in drums from Burke and a rolling bassline Stein seemingly plucked from his own band’s early material. Iggy’s voice is mostly in tune – and even in the correct key for the majority of the track. “Angry Hills” is a precursor to the kind of pensive, sensitive rock Iggy later peddled on (the far superior) Blah Blah Blah. It’s light, tuneful and proof that the album could have been so much more.

“Life of Work” rides a riotous synth groove, while Iggy moans and croons. Imagine the kind of tune Suicide would write for Iggy, and you’ve practically already imagined “Life of Work” into life. “The Ballad of Cookie McBride” has always been a connoisseur’s choice, because it’s so batshit crazy – it's the sound of the Wild West refracted through David Lynch’s lens. Iggy yodels his way through a missive about heading towards an “unhappy grave”. “So if you’re planning a natural trip / Don’t call up snooping on burial ridge”, Iggy warns, a little too enthusiastically for comfort. It has to be heard to be fully understood.

“Ordinary Bummer” is, sadly, just that. It’s a mopey ballad about heartbreak and “holding out for summer days”. It’s like a cheap version of Blondie’s “Dreaming”. “Eat Or Be Eaten”, however, is one of the undeniable successes on the album. Iggy urges you to “tilt your head back and take a gulp/Of air that’s screamed a thousand times”, in one of his more poetic turns.

“Bulldozer” is far and away the rockingest of all the tunes here, and Iggy’s vampiric baritone evokes both Captain Beefheart and Lux Interior. “Platonic” is polished-smooth New Wave, with glassy guitars and a bulletproof, vacuum-sealed rhythm section. “The Horse Song” and “Street Crazies” both dunk our man further into the contemporary pop sounds of the day – from XTC on the former to Talking Heads’ Brian Eno-Africanisms on the latter. “Street Crazies” is almost certainly the track that inspired the title of the album – it sounds like a zombie wandering through a menagerie of rare birds. Then you have “Watching The News”, which is the most unsettling piece on an unsettling set, with its John Carpenter theatrics and Iggy’s William Burroughs-esque diatribe about modern life. Bizarre just about covers it.

Included with this new reissue is a version of “Pain and Suffering” (possibly Iggy’s best rock song of the '80s), with Deborah Harry on backing vocals. It’s presented here as the closing track, which is a very welcome addition, owing to the fact that it’s of a much higher quality than some of the material on the album proper.

Across the record, there are shades of Throbbing Gristle, Suicide, The Cramps, and Talking Heads. But strangely, the kind of vibe most often evoked here is the kind of thing Iggy acolytes Fat White Family go for with their music, a kind of greasy, sweaty, sleazy rock ‘n’ roll fitted with a sharp electronic edge. The irony is, of course, that Iggy is a huge fan of that band, and regularly features them on his radio show, proving beyond all doubt that, given chance, Pop really will eat itself. Even the gristly bits.