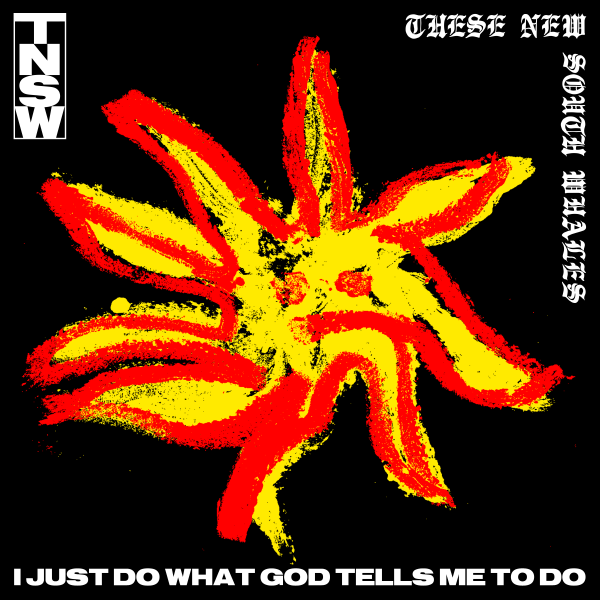 No one’s doing things quite like These New South Whales.

You could just as easily know them for their post-punk-cum-gothic-cum-new-wave and whatever else melts into their true to heart sound, as you'll know them from the mockumentary TV series they created to satirically - albeit painfully accurate - portray life as a young band.

Imagine The Clash with the youthful vigour and sparkling-eye of Flight Of The Conchords, and you get the idea. Being spritely enough to engage that inner-fight all young bands need, the puritan heart of punk is alive and high-kicking through the melodic undertow that carries These New South Whales into the heart of the underground.

Their second full-length, I Just Do What God Tells Me To Do, is a testament to everything that built before it, and then using it as a launchpad. It's a raucous directive toward the world at large, wherein the beating heart of punk lies.

Removing the visual element of the band - those comedic antics - the band still stands as, well, a proper band. Unlike contemporaries who've balanced these worlds but come off immersed in one or the other, These New South Whales are able to plant both sweaty, beer-soaked boots either side to stand tall - nipple tape and all.

Onto that alternative-genre defying sound; there's a boozy-swagger a la The Libertines, ("In The Light Of Day"), there's flittering, oozing Ramones urgency ("Do U Connect"), and dark, brooding post-punk ("It's Its Own Heart"). A perfect amalgamation of the darkest depths of music-dom.

There's always the threat that they could just about fall apart, like the thrashing forward momentum carrying them is too much, but they keep it together ready to pick themselves up and crack on.

Of course, there has to be that element that connects the serious punk to its mockumentary vessel, and that's where the titular track comes in. A slow, dreamy, atmospheric number which features processed spoken word conversation of two religious types that comes out of nowhere, but it would be remiss of them to forget, firmly placing that tongue in cheek.

There's nothing overt about These New South Whales in a musical sense - they're a band who know who they want to be in the world, and what they can offer it. They see the industry, and all the seriousness, and know how much to give - and more importantly how much to hold back. They're savagely uncompromising while playing a modern game, and on I Just Do What God Tells Me To Do it all merges to become a defining moment for a scrappy punk band from Australia.