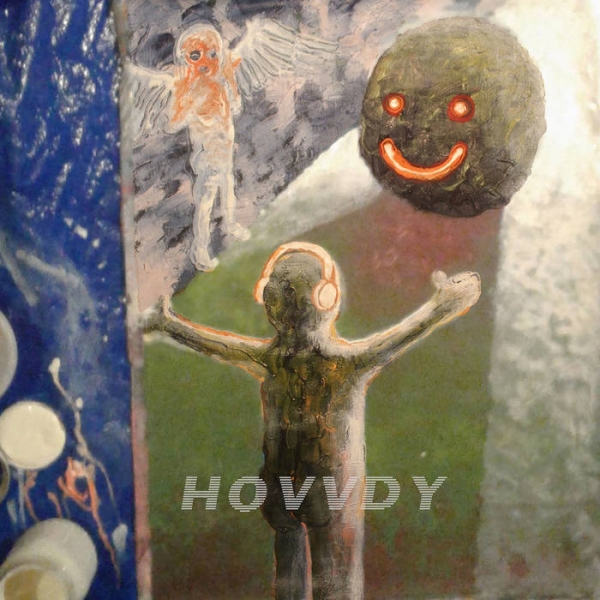 Charlie Martin and Will Taylor, the creative duo behind Hovvdy, create their music in isolation.

When they first met as drummers in separate bands – which itself leads to a rich rhythmic understanding in their music – they felt compelled to share the songs they had been writing on the side. This desire to confide shone a torch on a rare compatibility and proved to be the foundation of a trusted friendship. With hindsight it seems impossible that their songs could exist anywhere else other than alongside each other. As their individual sketches are fleshed out together, they become reliant as one, sharing the same oxygen. Where the roots lie are of little importance.

The title of Hovvdy’s third record suggests an element of hard work; picking up the slack for someone else’s shortcomings, the back-breaking toil to see something through. In a sense this is true. Thematically at least, Hovvdy are undertaking a big task in the scale of their ambition, which is to lift the hopes and spirits of those around them. However, as they develop their lazy charm into picturesque moments of support and clarity it never comes across as an effort. After all, in the relationships that really matter the heavy lifting doesn’t feel as such; silent sacrifices are gladly undertaken and there is an unforced desire to try harder (“don’t think I could do it better / try more everyday” – “Pixie”).

Heavy Lifter is a record swimming in friendship, familial affirmations and brotherly bonds; recognising connections that transcend rationality. In a world of divide and distance Hovvdy find balance in going the extra mile for loved ones; being the sympathetic ear to those drowning in white noise and the first to attempt to find common ground and make concessions. The duo continue to find and nurture love in spite of pain. Whether that be in being there for an ailing parent (“need a hand and I got one / by your side always” – “Sudbury”), or in the offer to help tackle life’s insurmountable challenges (“…you see the world caught on fire / I’ll try to put it out with my water gun” – “Watergun”).

Hovvdy have also stumbled upon a newfound lightness and brevity, revelling in the joyful ‘90s hip-hop beats of Jurassic 5 and De La Soul as showcased on “Mr Lee”, a spirit lifting speck of dream pop to accompany swims in the sunset. There are strands of friendship in the wistful strum and heavy-eyed suburban nostalgia of “1999”, imbued with a hard to place sensibility of comforting reassurance. Elsewhere “Ruin (My Ride)” opens with an emo flecked melody that gives way to snap claps and an optimistic choral refrain (“I don’t wanna see you give up”) as the groups admiration for (Sandy) Alex G shines through.

Smack bang in the middle of Heavy Lifter sits “TellmeI’masinger”. It is the biggest left turn on the record as a gleefully muddied vocal line crackles above toy keyboard tones. A studious homage to the lo-fi brilliance of Daniel Johnston and Sparklehorse, it acts as a perfect pivot for the album, providing a pause in which to take stock. It is worthy of its inclusion if only to give a glimpse into the pool of their influences.

In the past it has felt almost intrusive to stumble upon Hovvdy’s hushed moments, as if gratefully catching snippets through locked doors. Tracks felt closely guarded, focussed primarily on emphasising the beauty and simplicity of slowing down and catching a rescuing breath.

On Heavy Lifter they continue to find catharsis while moving in reverse as the bronzed halos of nostalgia meld with the intimacy of their blazed slow-core. But here they leave the door ajar just enough to let the world in. Heavy Lifter is a thank you to those around them, a promise to be there and a document of hope (“you could fall apart / but you won’t / I’ll come through for you” – “Lifted”).

In a recent interview with Gold Flake Paint, Martin said of the record that “we hope that it just makes people feel a little better”. Heavy Lifter is special in that it exudes hope and optimism, not in sharing pain but in actively looking for the positives in life. It is a rare thing to pull off earnestly. You can hide within it, shield beneath its sun-washed melodies, but still find something within it that gives you the strength to step back outside.