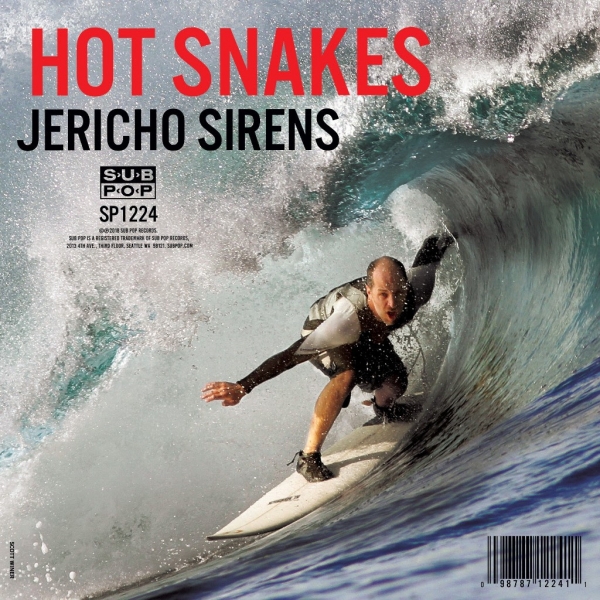 Hot Snakes were born an unlikely model of efficiency, of both jabbing riff and acerbic wit, from Drive Like Jehu singer/guitarists Rick Froberg and John Reis. The group pounded out three albums of Jehu-hits-the-garage rock between 2000 and 2004, all of which clocked in at just over half an hour. How little things can change in fourteen years.

The Drive Like Jehu reunion tour came to a careering finish two summers ago, but Froberg and Reis still seem to be feeling its momentum as they push on into Jericho Sirens, treads smoking and splattered engine oil griming up their guitar strings. Through their original run, Hot Snakes’ minds appeared to be increasingly weighed down with adult concerns, mundane processes like invoices and audits. Here is their moment to revel in rebirth, and yet the aches and pains are setting in right from the start. “Can’t stand on my own feet/I need a doctor”, Froberg begins on “I Need a Doctor”. The way he’s been straining his vocal cords like this for thirty years now, it would be a wonder if he hasn’t also had to see a throat specialist at this point.

By the second half of the album, death is all around them: “Death Camp Fantasy” (“Have I been preyed upon?”), “Death Doula” (“You’re the last thing I’m gonna see”), and the final “Death of a Sportsman” (“What is left of him ain’t worth sending home”). Yet, in action at least, they are raging against it and all its inevitability. “I hear something strange / It seems out of range” warns Froberg on the title track, the thumping heart of an album that otherwise keeps its pulse elevated. Summoning the full force of their sirens against mortality’s walls of Jericho, the band are determined to at least punch a hole through and steal a few bricks.

The math in any Froberg-plus-Reis configuration is going to add up, but Jericho Sirens is an album that can play to both Hot Snakes’ audience and those who might have hoped for any kind of new Drive Like Jehu music with that reunion -- the Venn diagram overlap between those two demographics being almost entire. A relief then, that Hot Snakes are as dry, dented and slightly demented as ever.