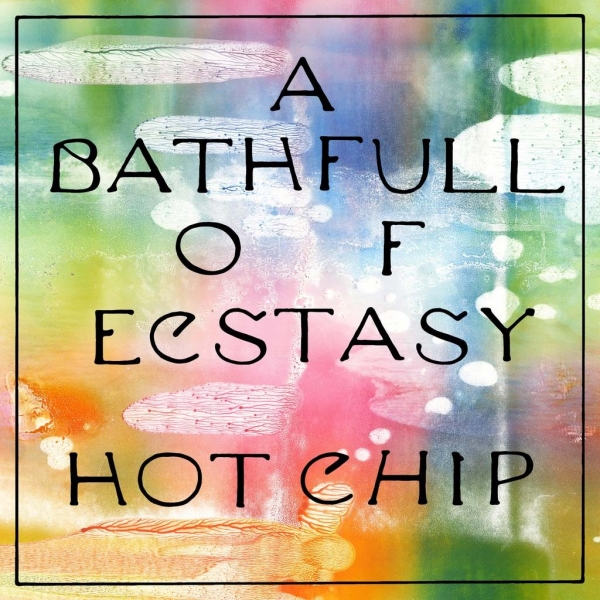 The neurotransmitter dopamine is common to both the action of ecstasy the drug, and ecstasy the emotion.

It is a key mediator within a neurological reward system that allows humans to seek and reinforce pleasure. A Bath Full of Ecstasy, Hot Chip’s seventh studio album, aims directly for the brain’s pleasure and reward systems, successfully stimulating heady rushes of dopamine-fuelled rapture.

At its zenith, A Bath Full of Ecstasy contains some of the group’s most memorable pop songwriting. It also finds the five-piece frequently juxtaposing melancholy and euphoria to resounding effect. Amidst pulsating rhythms and swathes of technicolor pop, Alexis Taylor’s unique vocal is consistently fecund with longing, helping translate the confusion, pain and joy of love and desire.

The early combination of “Melody of Love” and “Spell” thus lead an A-Side, which is built as much for the soul as it is the dance-floor. The lustful “Spell” - with its robotic groove and babbling vox synthesisers - features an instantly catchy and pulse-quickening chorus. Yet amongst its captivating melodies and vocoded harmonies, Taylor exclaims yearning oxymorons: “now I feel your curse/it’s all that I wanted”.

Similarly, “Melody of Love” intertwines Taylor’s longing vocals and elegiac piano chords with driving rhythms, bright synth stabs and warped vocal samples. Surprisingly, “Melody of Love” then crackles with applause before an almighty gospel sample (courtesy of The Mighty Clouds of Joy) intercuts the album opener. The sample acts as a piecing and transcendent ray of light, which is then refracted into brilliant disco-tinged colour as Hot Chip surge back into the track's marvellous chorus.

The opening combination of “Melody of Love” and “Spell” also highlight the rich tapestry of electronic instrumentation woven throughout A Bath Full of Ecstasy - immersing the listener in (not a bath but) an ocean of shimmering sound. Felix Martin’s modular synthesisers bubble, fizz and chime throughout the record, giving many of the nine tracks great depth. Hidden within each of them are a number of aural treats, in the form subtle sequences and melodies, which reveal themselves upon multiple listens.

This greater emphasis on textural work is befitting a record whose second half showcases the band’s more patient and experimental approach to songwriting. The motorik rhythms and transportive synthesisers of “Clear Blue Skies”, for example, make it highly reminiscent of the experimental, voyaging mid-section of Kraftwerk’s “Autobahn”. Analogous to how Kraftwerk evoked the passing of roads, plains and rolling-hills through “Autobahn”’s arrangement, Hot Chip conjure the image of the dawn light rising before our protagonist is enveloped in gorgeous and infinite blue.

“Clear Blue Skies” is the second half of an experimental duo, as it segues gracefully from the ethereal “Why Does My Mind”. Saturated in reversed samples, “Why Does My Mind” distorts what could have been a simple ballad into a blissful daydream.

Greater patience, in particular, is seen on the likes of “Positive” and “No God”, which both build to rousing climaxes over a five-and-a-half minute running time. “Positive”, a reflection on resilience and respite, builds with production flares as Taylor and Joe Goddard’s melancholic vocals duel. “No God” furthermore finds Taylor’s vocals being met initially by only a sequenced synth melody, before an array of percussion, house pianos and rising filter sweeps elevate the listener to a state of mild elation. Even the house-inspired behemoth, “Hungry Child”, requires a degree of patience from the listener, before a flurry of propulsive hi-hats and bass are unleashed.

Even at their most patient and experimental on A Bath Full of Ecstasy, Hot Chip maintain a potency to their songwriting. This may be in part due to the addition of external producers (Philippe Zdar and Rodaidh McDonald) to the creative process - a novel approach for the band. Hot Chip themselves have subsequently praised co-producer Rodaidh McDonald’s ruthlessness and ability to maintain a tautness to their songs. It is only on “Echo” where a track feels flaccid. Its repetition of key motifs, as well as a lack of playfulness, serve as the primary reasons for its downfall. Although one of the record’s weaker tracks, the chopped vocal samples on “Bath Full of Ecstasy”, allow it to at least retain a degree of playfulness, which “Echo” appears to lack.

If Hot Chip were to ever release a ‘greatest hits’ record, one would find a collection of intelligent and eccentric pop songs overflowing with fearless invention and reinvention. While they remain much beloved by critics and fans alike, there has always been a charming discreetness to the London five-piece. Yet subtly, over the course of their now seven-album career, they have cemented themselves as part of a small vanguard of modern British pop music. Their ingenuity and introspection often serves as an antidote to brash, factory-made pop, making them crucial figures within the wider pop landscape. On A Bath Full of Ecstasy, Hot Chip remain as vital as ever.