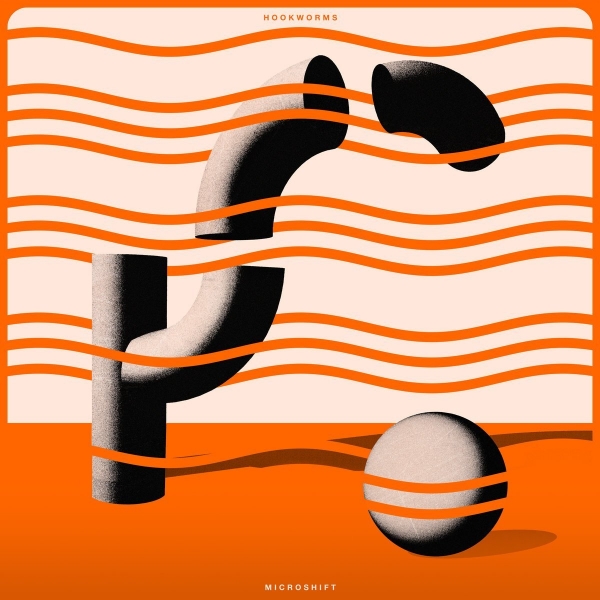 Anyone familiar with Hookworms‘ hometown of Leeds will know that beyond a veneer of consumerism in the city there lies a fiercely defiant, underground independent scene, both anarchic and self-sufficient.

Hookworms embody this attitude. Although signed to Domino records, their ethos is DIY; they’re self-managed, self-produced (frontman MJ is a producer of note), and record in MJ's Suburban Home Studios in Kirkstall, a workspace which had to be rebuilt pretty much from scratch after being gutted when the River Aire broke its banks back in 2015.

Initially incorrectly lumped in with the 'new psych' scene, this third album (following 2014s The Hum and Pearl Mystic a year prior) seesHookworms moving away away from the cosmic punk of their past, although barely concealed rage remains evident. More than anything else however, groove-based propulsion informs proceedings this time. With their studio out of action while being rebuilt, the band focused on creating samples and loops which alongside use of modular synths has naturally led to a more electronic sound, one which suits them perfectly.

Opening track "Negative Space" may on first listen come across as that 'rock band goes dance' thing, but there's something much more substantial going on here. Bubbling analogue sounds and a pervading low-key delivery gradually build into uneasy but danceable anxiety, MJ’s vocal rising in intensity in tandem with the music. More ranting than singing, he spits out frustrated lines such as “I'm sure I used to make you laugh / but now you're not reacting" before repeatedly asking “how long’s forever?”. Synth uplifts and grinding guitar work typify the sound here and throughout Microshift, a record that's lyrically bummed out but musically sprinkled with euphorica.

This is the first proper reveal from MJ. His bouts of depression are well documented elsewhere but on record such emotions have previously been obscured by vocal reverb and layers of sound. This time, his vocals are given their own space and show how compelling a lyricist he is. Some of the words and phrases used make his state of mind explicit; on "Static Resistance", the jittery drone-led krautrock pop fizz masks verses of pure (but catchy) paranoia (“I ran from my feelings / I ran from the city/ I ran from desire / lust haunts us forever”). This kind of juxtaposition isn’t simple to achieve - taking a coda of “Facing down / I’m feeling awful” and making it dancey as hell takes skill, confidence and sheer fuck it-ness.

"Ullswater", the central point and highlight of the album, is a staggering piece of music, the band reimagined as machine: techno riffs, harmonious organs and percussive complexity clash with rising vigour and claustrophobic atmospherics as MJ muses how “Losing faith in / time…../ I should’ve have seen you more, I know” before a grouped holler of “HOW. YOU. COMFORT. ME!”. Where previously they couldn’t - or didn’t want to - record something with such clarity as shown here, when MJ shouts over grinding punk riffing “I’ll always love you / it's still the last thing I'll say, I know it's the last thing I'll do – stay strong”, it’s not hollow in any way, but heartfelt and genuinely moving.

They flit between genres with no regard towards them: there’s cinematic, Spiritualized-influenced gloom mixed with spatial ambience on the beautifully sad "The Soft Season", the lullaby qualities of the purely electronic "Each Time We Pass" lure you into a moment of calm briskly ended by the gritty urgency, parping sax and guitar screech of "Boxing Day", clearly a captured moment of a lengthy session in the studio where they’ve found the two minutes of gold, snipped it out and put it there - no fancy edits or subtle endings, just two minutes of thrilling sound performed by five musicians all trying to outplay the other. It’s truly exhilarating.

Groove-based krautrock is visited on the epic nine minutes of "Opener". The use of electronic loops and monotonous guitar lines results in something trancelike, hypnotic and accompanied by the most impassioned vocal on the album ("I can’t last the distance / It’s hard to find a better world / Where we can countercall the shortcomings, oppress them til they're hidden from the world /or just let it all out"). Again, on paper it might read kinda twee, but its delivered with such steely conviction, the message of it totally being OK to not be OK proves to be one which is deeply profound.

It's the beginning of the 2018 and talk of albums of the year right now is obviously churlish, but on Microshift we're hearing a band hitting their sweet spot with such an effortless swagger that we're sure this is a contender.