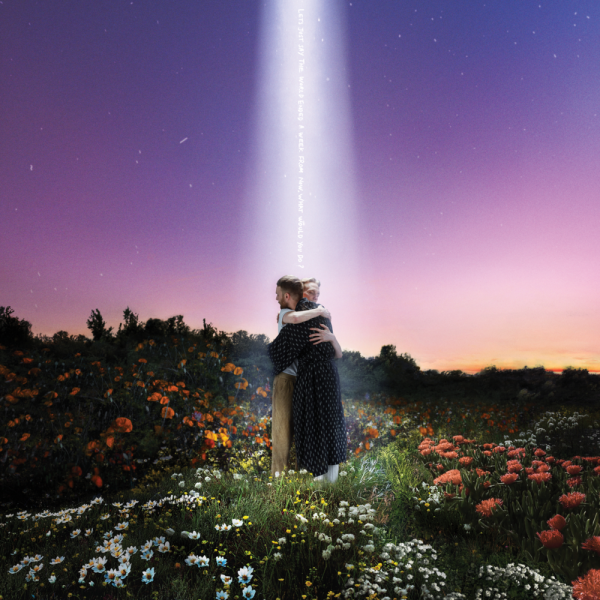 Before releasing their successful lockdown mixtape no song without you last year, English duo HONNE (James Hatcher and Andy Clutterbuck) had penned a few ideas for an album. In these songs, they raised the question, “if the world ended a week from now, what would you do?” – little did they know it almost would as they found themselves in the midst of a global pandemic.

LET'S JUST SAY THE WORLD ENDED A WEEK FROM NOW, WHAT WOULD YOU DO? raises the impossible question of the end of time, but firmly resounds with an answer: love. The album is a somewhat thematic departure from 2020’s no song without you, as they swap social distancing for hugging, and distance for intimacy. It’s a wholesome and heart-warming album, admittedly something HONNE have become known for, but this time they’ve dipped their toes into the pop-sphere with no holds barred.

Rather than restricting themselves within their own parameters, HONNE have opened the gates of their creativity, allowing their ideas to simply roll. It’s fun to hear them try out sonics of funk on “WHAT WOULD YOU DO?” and R&B on “THREE STRIKES” - not to mention the reminiscent sounds from their previous works weaved into the essence of the album. Hearing artists successfully try out new ideas is always a pleasure to hear, and HONNE have done just that.

It’s not just the ideas that are fresh either. They're also collaborating with a burgeoning batch of artists (and a couple of household names), none of which disappoint. From 88rising’s NIKI lending her smooth vocals on the delightful “COMING HOME”, to up and coming star Griff blessing “BACK ON TOP” with her presence, not to mention Pink Sweat$ on the titular track “WHAT WOULD YOU DO?”. It goes one step further as both Sofía Valdés and Khalid take the lead on their respective tracks, almost putting HONNE in the back seat to let the features truly shine. Their collaborations also don’t stop at featured artists, and with co-writers like Arlo Parks, Sam Smith, and MNEK, it comes as no surprise that each and every song is written delicately and carefully, resulting in a solid collection of songs that don't faulter.

After last year’s sorrow over the vast distance between lovers, this year’s project feels almost like a resolution. As we hear snippets of Clutterbuck’s wedding on “I’M THE LUCKY ONE”, and the euphoric feelings of love on “DANCING ON A CLOUD”, it’s hard to not feel uplifted. This is the album we all need as we head into the darker days of winter, and the advice we all need as we open up the world again to embrace one another – like we would if the world was ending in just one week.