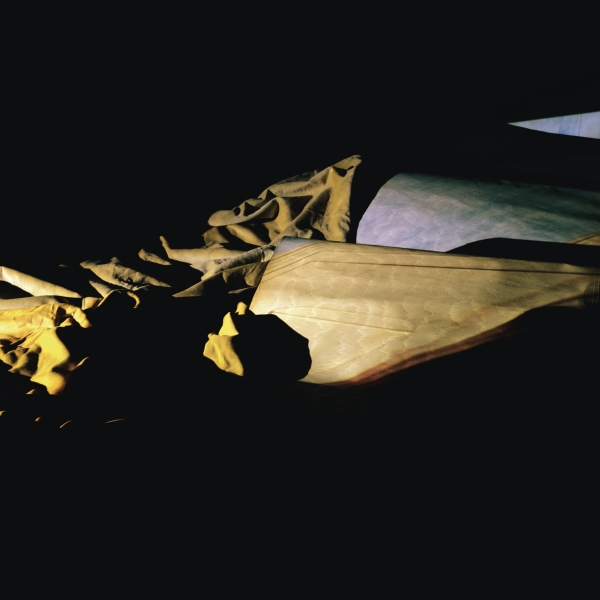 Gradually, we’ve all come to the understanding – whether consciously or not – that there’s little that a hashtag can’t ultimately reveal. In a connected world, there is no room for mystery but that’s just what makes Holy Other, and the mythos surrounding him, so intriguing.

Having distinguished himself in the early 2010’s with two beloved EPs and his acclaimed 2012 debut Held, Holy Other was well placed for his ongoing success. His was a style that played delicately with nostalgia and heartbreak and this allowed him to build a body of work that perceptively addressed the human. Artfully exploring intimacy, loss, past and present, his work remains eerily immortal; utterly of its time but also defiantly modern.

Following his debut, Holy Other – real name David Ainley – disappeared and for nine years his retreat was all but total. Lieve is Ainley’s response to that protracted absence and his still lingering myth.

Built during 2020 from material recorded and resampled out of an extended stay at Bidston Observatory on the Wirral, Ainley’s latest is an album of confict. Lieve is a record that pits the real and the artificial against one another, and in that struggle proves that it is an album that was well worth waiting for.

The album begins with "Dirt Under Your Nails", an intoxicating piece comprised of yawning pillars of sound interrupted only by the intermittent punch of an unrelenting bass punch. Next is single "Lieve", a cautious and evocative track which reveals the albums aforementioned conceit. The human and the automated clash appreciably here, and via sampled performances from guest musicians, Ainley finds a strong and unique counterpoint to his style. In "Lieve"’s case, it is saxophonist Daniel Thorne that throws Holy Other from his well-founded course, pushing him closer to analogue than he has ever ventured before. It’s a pertinent statement of intent and one which reaches appreciably across the record.

If Lieve does indeed facilitate a battle between the organic and inorganic, then "Whatever You Are, You’re Not Mine" is the album’s most palpable example of it. In a veritable cocoon of sound, it presents the human voice with a clarity and transparency that Holy Other has never afforded it before. The raw mortality of it is tangible, even in spite of its lapses into digital.

The physical to and fro of musical control is taken to its artificial conclusion on "Refuse" though. Beginning with a whispering mechanical hiss, it progresses into Holy Other’s most grandiose piece to date, eventually forming an orchestra of automation at its close.

Also worthy of note, is "Shudder". Perhaps the most typical of the offerings on Lieve, "Shudder" sees Ainley refer back to his previous work openly here. Notably, it’s in both the melodic and tonal choices that we can feel Holy Other looking back to his 2011 EP, With U, almost offering a spiritual successor to "Know Where" as he does.

However, there are some less stellar tracks on offer here. "Groundless", is a uniformly well produced track which sees reverb spread irenically in its runtime, but it also is one of the least sonically complex songs on the album. Consequently, it outstays it’s welcome a little. Equally, "Up Heave" is a fractious, fluctuating piece which lists steadily but meekly towards its end. However, these tracks are short and inoffensive enough that they do not ultimately hurt the strengths of the album.

In the end though, mysteries are only mysteries for so long, and with his return, David Ainley erases a little of his; thankfully, it’s a move for the better. Holy Other is a critical voice in a world that’s become emotionally remote and his latest record is monument to that fact. Speaking to a humanity that few producers can replicate, Lieve proves that Holy Other’s efforts are just as essential in 2021 as they were in 2012. Here’s hoping that the wait isn’t quite so long for the next one.