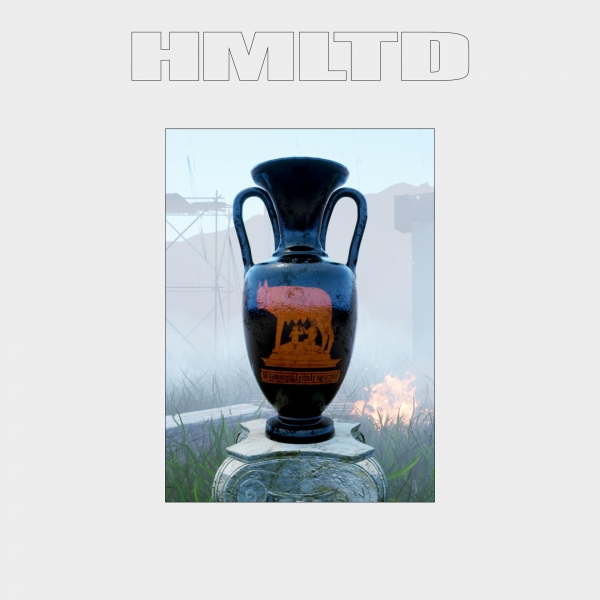 Rich with avant-garde flair and provocateur spirit, the London-based quintet more than justify their fêted status on a much-anticipated debut.

Despite an aesthetic rooted in the storied androgynous tradition of glam rock and new romanticism, HMLTD appear less defined by the rigid tropes of the past, instead transcending genre boundaries at a whim; hybridising art rock, trap, electro and post-punk elements with quickfire elasticity. Formerly known as Happy Meal Ltd, the five-piece have previously issued glimpses of their penchant for quasi-new wave decadence, albeit in a chequered fashion – a scattering of singles and 2018 EP release Hate Music Last Time Delete to their name. Testament to the outfit’s commitment to creative independence, West Of Eden indulges in a vision freed from the corporate machinations that have proved a professional thorn in the band’s side in recent years, namely their breakdown in relations with Sony.

London-via-Torquay frontman Henry Spychalski alternates between the persona of crooning troubadour and angst-ridden anarchist with the kind of vacillative opulence that commands immediate attention, proving a master at tempo-shifting traction. “The West Is Dead” ushers in the album’s treatise on western civilisation as an eroding edifice, its apparent impending downfall serenaded with Spychalski’s paradoxical unruly sophistication: “The Dalai Lama wore Dolce and Gabbana in vermillion red / And the West is dead / CEOs hang themselves by their neckties / And the West is dead”. Spaghetti western strings strike through “The Ballad of Calamity James”, hinging alongside “To The Door” in a glitch-torn diptych - Ennio Morricone spliced with the likes of The Garden and Outer Limits Recordings. The spiralling Bowie-esque architecture of “Satan, Luella & I” yields to a similar sense of occasion; shades of Roxy Music, Wall Of Voodoo and Sparks recognisable at times, notably on “Mikey’s Song” and the Depeche Mode-nodding “Nobody Stays In Love”.

With a title subverting John Steinbeck’s East Of Eden, and embedded allusions to the Biblical story of Cain and Able, HMLTD nod towards in a philosophical discourse that seems relevant in our turbulent times; Spychalski describing the West as a “superpower masked by the façade of luxury and equality... a dying corpse stained by its own sins against humanity”. This ouroboros-like image underpins West Of Eden, which could perhaps only be forged in a crucible of turmoil and chaos; the trials of the past few years strengthen the backbone of a concept album that flirts with cultural posterity, morality and existential weight in a concerted sense of design.

Committed to a style and substance that simultaneously looks to the past and future, the five-piece soundtrack their role as esoteric prophets of doom with a sonic credo that proves genuinely idiosyncratic in the current climate – sharp, wit-filled and uninhibited stuff.