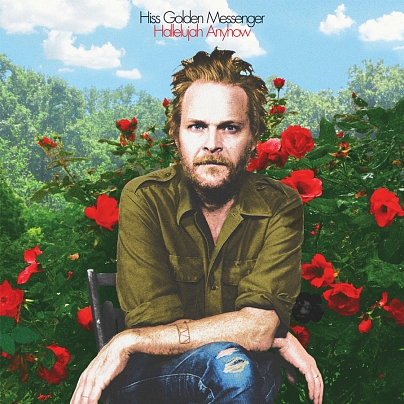 Let’s address the elephant in the room head on. Hiss Golden Messenger aren’t reinventing the wheel or discovering a whole new version of the fire.

If you could somehow stuck a pin to this album’s aesthetic, out would pour Tupelo Honey-era Van Morrison, vintage Rolling Stones or Faces and a thick stream of American roots music: folk, soul and country, and especially the hybrid of the latter two that briefly flourished in the 70’s courtesy of, say, Larry Jon Wilson, Mickey Newbury and Jim Ford. You could say there’s not an original musical idea anywhere to be seen on Hallelujah Anyhow and be 100% accurate. But you’d be totally missing the point and with it the album’s immense, irresistible charm.

MC Taylor - the Durham, North Carolina-based songwriter at the core of the loose HGM collective - isn't some gormless pastiche-merchant, peddling an approximation of someone else's sound due to a shortage of original ideas. The effortless classicisms and roots-y retro vibes of Hallelujah Anyhow are the culmination of 20-odd years of hard road as a professional musician, with only the last couple of HGM releases bringing anything approaching success Taylor's way. After thrashing out hardcore noise in Ex-Ignota, engaging in widescreen Americana with the Court & Spark and undertaking explorations into dubwise treatments of classic rock templates (Country Hai East Cotton from 2009), stark solo acoustic-a (2010's haunting and hushed lo-fi landmark Bad Debt, reissued in 2014) and psychedelically frazzled JJ Cale-isms (the superbly spooked Poor Moon from 2012), Taylor eventually located an approach that suited him just right on last year's career-best Heart Like a Levee. A truly spellbinding set, the vibrant album suggested that Taylor had ingested his undoubtedly immense record collection (to illustrate his expertise of his chosen templates, Taylor compiled two fantastic sets of country-funk rarities under the Wah-Wah Cowboys banner some years ago) and regurgitated the lot as a warm, swampy sound that tipped its hat in various legendary directions but ultimately sounded exactly and only like Hiss Golden Messenger, providing a perfect accompaniment to Taylor's increasingly idiosyncratic and resonant songwriting that now not only resembled but also deserved to be ranked alongside all those fabled vintage inspirations.

Whilst it's initially somewhat disappointing how similar to its predecessor Hallelujah Anyhow sounds (although the distorted harp blasting through the folky strums of "Gulfport You've Been on My Mind" is a welcome new touch), and you may well miss the eclectic swerves in mood that brightened up 2013's Haw, Taylor is likely too busy churning out songs at a feverish rate - Heart Like a Levee's deluxe edition came with Vestapol, an acoustic bonus album of new tunes that were better than most songwriters' headline material - to recalibrate his sound again just yet.

And what songs they are. The words 'dark' and 'darkness' keep cropping up, but the album, recorded quickly with a band including brothers Brad and Phil Cook of Megafaun fame (the latter's recent solo album Southland Mission is a must-hear to anyone interested in Taylor's work), is HGM's least troubled and brooding to date, on surface at least. To Taylor, dark times are a passing, natural phase, an opportunity to learn new ways to live whilst waiting for the ship to get back on a brighter course. ''I've never been afraid of the darkness/it's just a different kind of light", goes the opener "Jenny of the Roses", and this sense of confronting challenges defiantly unbowed infuses all of Hallelujah Anyhow. The result is an album that's uplifting without stumbling into the saccharine-dosed forced jolliness that particular word might bring to mind. On Hallelujah Anyhow, times are only as hard as you let them be, and the spirit of righteousness is impossible to extinguish entirely, no matter how bleak things might look.

Taylor stated a dislike of overt protest songs in a recent interview and there's certainly no old-school finger-pointing going on here. However, it's tempting to read the subtly gospel-tinged hopefulness of swaying closer "When the Wall Comes Down" as a commentary on dark - that word again - recent developments in America. Metaphorical walls are going up and there's lots of blustery talk of real walls going up too, but Taylor's looking forward to a brighter future where all such obstacles are bound to tumble down. There's plenty of joy here too: the rollicking "Domino (Time Will Tell)" reminisces about Taylor's misspent youth spent immersed in ''old SGs and cigarette smoke'' whilst the music strikes up such a convincing retake of the beer-splattered boogie of The Faces it'd be pretty preposterous did the track not pack a groove that could topple mountains. Besides, what better way to deliver a tune about ''the gospel of the jukebox'' than to tie it to the kind of glorious racket that might have been accompanying the beer-swilling at some long-ago dive bar? Elsewhere, the breezy "Lost Out in the Darkness" could almost be a grittier, sweatier version of Tom Petty & The Heartbreakers, which is another way of saying that the material is pretty infectious. Whilst the album is decidedly live-in-the-room, there's alluring detail in the uncluttered arrangements: see how the horns stumble drunkenly all around the excellent "John The Gun", beefed up from its folk incarnation on Vestapol, or the sweeping E-Street Band piano on the gracefully hushed “Caledonia, My Love”.

Things get properly intense soon as the tempo drops. The soaring, guardedly optimistic country-soul of "Harder Rain" is the album's highpoint and possibly HGM's most powerful moment yet, a heartfelt pledge of allegiance to a friend or loved one who can’t be happy in the here and now. Were this a long-lost cut from some dusty yesteryear unearthed on a country-funk compilation, crate-digging connoisseurs would be foaming at the mouth. Yet despite its obviously audible forebears and roots deep in the soils surrounding Memphis and Nashville, it sounds unmistakably now and relevant to the current moment in time. It's this ability to render oft-visited templates totally fresh that allows Hallelujah Anyhow – and Hiss Golden Messenger’s output in general – to tower head and shoulders above standard issue retro merchants: this material not only references the past masters of American music but also deserves to be recognised as a valid part of that same lineage.