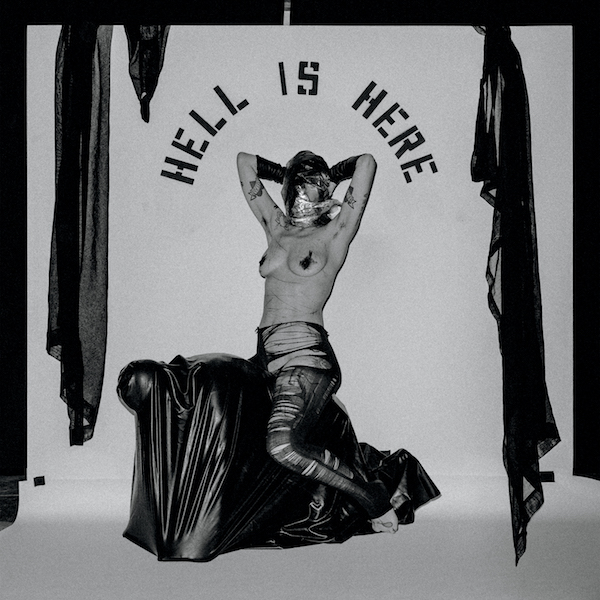 This is not a record for the faint-hearted. Chicago-based electronic duo HIDE mesh pulverizing synths, aggressive percussion and defiant vocals on their new album Hell is Here, released via Dais Records.

Formed of fine artist Heather Gabel and percussionist Seth Sher, together the pair transform vulnerability in to powerful, distracting industrial tunes. HIDE is what happens when people trade bruxism and silence for accountability, and start screaming back at their oppressors.

Gabel and Sher are renowned for their electric live performances, and channeling the voices of those who have been brutalized through their music. Their 2016 EP Black Flame was dedicated to the memory of Reyhana Jabbari – a 27-year-old Iranian woman who was hung for allegedly killing the person who tried to rape her. Their 2017 debut album Castration Anxiety addressed issues surrounding the dynamics of power within a patriarchal world. Now, on Hell Is Here, HIDE are screaming fiercely in to the void created by society’s chronic lack of empathy.

Opening track “Chainsaw” is the beginning of this ruthless take down. Blistering noise and Gabel’s confrontational vocals create a nerve-shredding atmosphere, reflective of the track’s uncomfortable context. The lyrics to “Chainsaw” are verbal assaults the duo have received repeatedly on the street, often while in the company of a child. The track’s accompanying video closes with the statement “Rape culture kills” and features multiple pictures and names of women who have been raped and murdered in recent years, making their message all the more poignant.

Their dissection of internalized misogyny continues on following track “999”. It opens with a sample of a male voice discussing the pervasive nature of depersonalization, before Gabel repeatedly screams “You don’t look sick to me” – highlighting how a person’s animalistic darkness can be hidden beneath the surface. "SSSD" (which stands for Self Self Self Destruct) breaks through with an intense, repetitive drum beat that feels like it’s repeatedly knocking against the inside of your skull, and is followed by the bitter, abrasive pill “Everyone's Dead”.

Half way through the record, we find ourselves in “Hell”, commanded once again by Gabel’s vicious vocals and synths that sound like warning sirens. The energy behind the vocal delivery is a perfect match for Sher’s relentless, blistering sounds. Following track “Respite” is a quieter, but equally as punishing musical interlude, before Gabel’s volatile voice bleeds back in with full force on “1/2 Trash” and the multi-layered “Grief”. The same can be said for penultimate track “Pain”, which is a harsh two minutes of anxious echoes, snaps and shouts. “I sharpened my teeth for this” sneers Gabel over abrasive, brutal beats on final track “Raw Dream”. The unsettling percussion and cutting synth textures serve to strengthen her battle cry.

It’s hard to remain unaffected by Hell Is Here. The context, the lyrical content, and the overwhelming volume of their sound kicks and crashes through traumatic themes, providing a cathartic burst of anxious freedom. It’s a record designed to bite chunks out of its listeners, and will probably have the same effect when heard live.