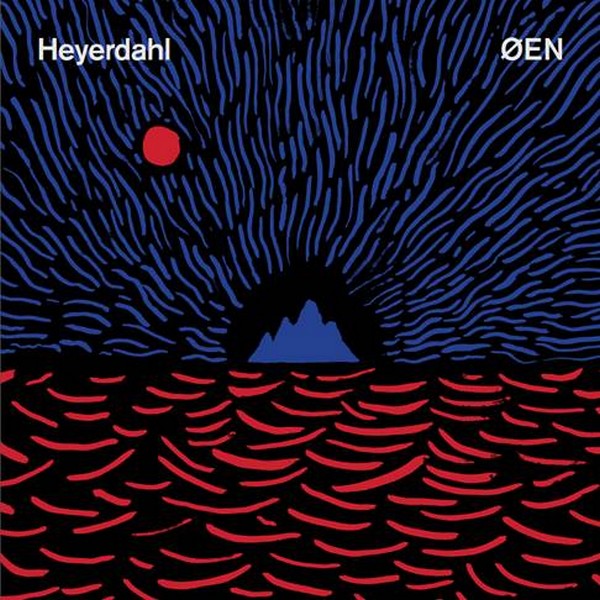 If you’re going to leave the beautiful city of Oslo to get away from it all and find inspiration, then you’re either mad or you’ve got somewhere equally as lovely in prospect. The Norwegian four-piece Heyerdahl (named after the country’s most famous son, the wonderful explorer Thor) made up of veterans of the Oslo scene but very much a new band, headed out of the city to the northwest coast, and ended up in the remote town of Vågsøy. Now, heading out of the city isn’t such a rare occurrence when a band wants to find some inspiration; what’s more rare is deciding to record an album in a lighthouse. Kenneth Ishak, Mattis With, Tore Løchstøer Hauge and Magne Mostue produced the band’s debut album Øen in the surroundings of Kråkenes Lighthouse, and the result is a record rich with references to the sea, old local tales, nature, and creaking with the isolation and darkness that comes with such a recording environment.

While not musically comparable, the record touches on similar themes to those explored by the much-missed Port O’Brien, a band who released two seafaring records before splitting in 2011. Heyerdahl don’t follow in that band’s folk tradition but instead give us epic pop-rock that while ambitious doesn’t end up sounding an embarrassment like Coldplay’s Mylo Xyloto. On opening track ‘Enkebukten’ the music sounds like Mew propelled by Joy Division-esque basslines, with lyrics touching on the loss of a fishing village’s menfolk at sea. It’s a gentle beginning, but things step up with the angular guitars and insistent hooks of ‘Hyena’ which build to a stirring climax – a pattern that many of the songs on Øen seem to follow.

The gigantic-sounding ‘Shadows’ is the moment that captures what Heyerdahl do best. Booming drums, subtle guitar and electronics burble away in the background, and yelped vocals build across its running time, but just when you expect the explosion of colour and the leap to the radio-friendly chorus, the band pulls back from the cliff edge and drops the pace, returning to the building of tension… and repeat to fade. It’s a clever trick that avoids cliché and the mundane, and alongside Ishak’s tense vocals and often cryptic lyrics it fits perfectly. There are only 8 tracks on this debut, so Heyerdahl know they can’t really afford any duffers – ‘Beast’ pushes their luck with curious lyrics about love, nakedness and being killed by the ETA, and, although the music itself is rather fine, it leaves a bit of a sour taste. Luckily it’s followed by the gorgeous chimes and beatific steel drums of former single ‘Mirage’ (the brightness of the music hiding the lyrical sobriety), so all is forgotten quickly enough. The other misstep comes with the drab ‘Blood’, but again it’s followed by a great track, the closer ‘Emerald The Killer’. That song rounds things off in a suitably subdued manner, pulsating synths threatening below the surface while Ishak cries “I’m on fire!” over church organ and battering drums that are always just on the verge of cracking the tension, but never quite do.

If this record had been made in Oslo, Øen probably wouldn’t have sounded anything like it does. The landscape and history has seeped into the grooves on Heyerdahl’s debut record, giving it a depth and interest that might not have otherwise been there. It’s not perfect by any stretch, so the only question remains is where to make the next one – city, country or coast?