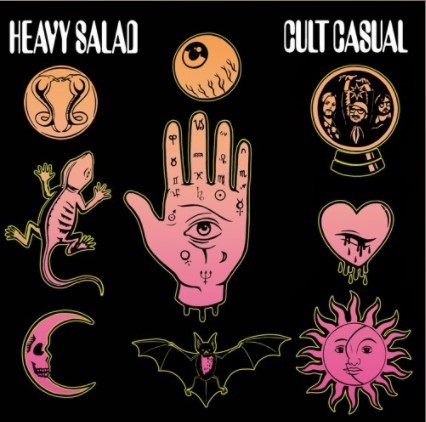 From the outset, it’s unclear exactly what to make of Heavy Salad. That name, combined with a self-authored description of a band that “work[s] in the space between perceived reality and the abyss of your mind. Melt yourself,” carries an inherent degree of ridiculousness.

The Manchester trio - bassist and vocalist Lee Mann, guitarist Rob Glennie, and drummer Allan Hutchison - hinted at this when they debuted last April with the bouncy and spacy rocker “Routine Dream,” complete with druggy absurdisms like, “You are never happy unless your life’s in a loop / Stability is funky like your microwaved soup".

After two more fine singles, the Springsteen-esque “Battery Acid” (whose chorus uses the “melt yourself” suggestion) and the slinky and sorta U2-ish “Reverse Snake,” Heavy Salad more or less confirm this assumption with their silly and satisfying debut outing, Cult Casual. The album collects the aforementioned singles and adds some post-punk-meet-Queens-of-the-Stone-Age (“This Song Is Not About Lizards”), a few Pavement-isms (“DEATH” and “Slow Ride”), some truly inspired backing vocals, and a couple of fun surprises.

You can look at the record as simply mindless Hollywood escapism. The music is almost entirely upbeat, and there are several times where losing one’s mind and/or breaking from reality is presented as a liberation of sorts: “Reality waves goodbye / Disintegrate your mind’s eye” and “These walls, they close you in / The ceiling and the ground / Well, they will fade away / Just like a gamma ray / You’re in the afterglow”.

Or perhaps it’s a concept album that uses the nature of cults—that is, brainwashing, the breaking down of the individual in favor of the whole, inventing your own reality because you don’t like the one around you—as a metaphor for the allure of the digital world. Indeed, many of the songs here beckon you with appealing melodies and sticky hooks paired with lyrics like, “This is the start of the end of your life / And this is the start of the end of your mind / So just hand it in to the man at the gate” and “The maze is locked, you’re not leaving / Dreaming answers will not work here / Power over people is based on fear”.

But maybe, just maybe, Cult Casual is simply a solid debut from a promising band, both of which are little more than entertaining nonsense. Maybe you’re just supposed to enjoy them and connect with them. Or, as Mann sings at the record’s beginning, “Try not think, just try to relate”. Yeah, let’s go with that.