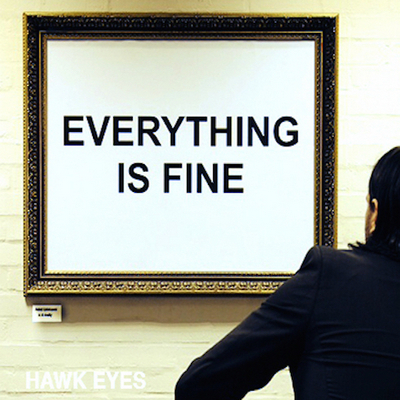 Way back in1957, Frank Sinatra said that it was “the most brutal, ugly, degenerate, vicious form of expression it has been my displeasure to hear”. He was talking about rock’n’roll. Now nearly sixty years later, there is absolutely no doubt that Ol’ Blue Eyes would express the exact same sentiments were he to have to listen to the music of Hawk Eyes.

Starting life as Chickenhawk, the Leeds-based band released their first album Modern Bodies in 2010. Having taken their name from a memoir by the Vietnam War veteran Robert Mason, they had not considered the adverse impact this would have upon them getting internet domain names. They therefore became Hawk Eyes and some two years later released their second album, Ideas. Despite this name change, both records shared the same central characteristics of unbridled fury, mayhem and a seemingly innate ability to kick up the most God Almighty of dins. On Everything Is Fine, Hawk Eyes may well still plunder those outer territories of punk, progressive rock, varying shades of metal, hardcore and heavy rock for their biggest spoils, but to this fearsome amalgam of noise they have now introduced far greater melody, refinement and even a certain sensitivity. The results are never anything less than impressive.

Everything Is Fine first stumbles into view courtesy of “The Trap”, its drunken, off-kilter riff propelling the Hawk Eyes juggernaut of guitars, bass, drums and voice ever forward. By the time the vehicle has reached “Die Trying” – the first single to be taken from the album – and the line “sea salt in my hair is annoying now” we are reminded of the acute writer’s block guitarist and vocalist Paul Astick had experienced during the album’s fourteen month gestation period. Astick was to eventually draw inspiration from a nocturnal visit to Spurn Point, a narrow sand spit on the tip of the East Yorkshire coast that reaches its spindly finger far out into the North Sea. “Die Trying” captures perfectly the desolation of this remote piece of land, a sinister sense of foreboding lurking in every corner of its portentous melody.

One of four tracks on last year’s EP That’s What This Is, “More Than A Million” makes a quick and most welcome reappearance, the incessant clatter of guitars and drums a reassuring platform from which Astick’s vocals positively soar.  And the album’s stand-out track “Night Music” (gleefully reminiscent of Queens Of The Stone Age around the time of Songs for the Deaf) contains everything that hard rock should have – a propulsive rhythm (new drummer John Mackenzie having added even greater heft to Hawk Eyes already considerable engine room); barely decipherable, ear-shredding vocals; and the most thunderous of guitar riffs that will stay rattling around inside your brain for days afterwards.

The monumental "TFF" brings Everything Is Fine to an exultant close. The longest track on the album, it embodies the Hawk Eyes’ sonic evolution. On this their third album - produced in collaboration with Andy Hawkins - there is a clear maturation of ideas as the band rein in much of their earlier excess by tempering noise with nuance. It is still not music for the faint hearted and it may well be brutal, ugly, degenerate and vicious at times. It also happens to be a record that Frank Sinatra, were he still alive today, would be almost guaranteed to despise. But none of this can distract from the fact that Everything Is Fine is Hawk Eyes' most complete record to date, and ultimately the most thrilling and visceral of listens.