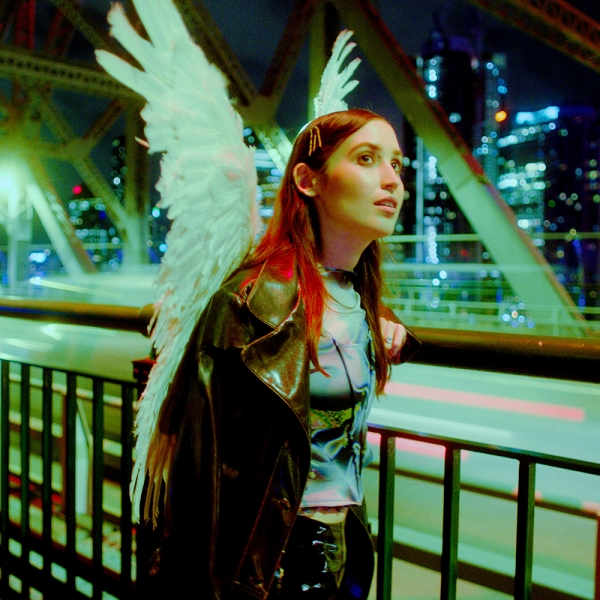 On her second full-length release, Hatchie reinvents and reclaims herself, whilst remaining true to the dreamy red thread that ties her sound together.

You don’t need to listen much further than the first chorus of the track one to be struck by what a step forward Hatchie makes on Giving The World Away. An immediate highlight, opener "Lights On" blends decades of influence – new wave synths, shuddering rhythms and then sprightly, girl-band-esque vocal inflections through the shimmying chorus. It’s an artistic statement of identity, and an apt preparation for the sonic world Hatchie is taking us around on the rest of the record.

The remainder of Giving The World Away continues to revel in its variety, a vignette approach to Hatchie’s storytelling that’s distinct yet cohesive. Dipping from dreamworlds to dance-pop, delving into ravey textures to spell out her feelings, Hatchie fluctuates between mellow and moody with ease. Some of the album’s most gorgeous tracks are the ones where she delivers an emotional message through a musical smokescreen that isn’t as melancholy as you might expect – "Quicksand", though dark in its reverberating percussion and baritone basslines, is also relentlessly upbeat. Title track "Giving The World Away" also shows off Hatchie’s duality between sonic darkness and sheer glamour – the line is so fine, and Hatchie treads it with acrobatic skill.

Of course, her aptitude for a hazy ballad is still intact. In fact, it’s amplified by contrast: "Don’t Leave Me In The Rain" is one of the album’s more conventional love songs, but it’s a standout because alongside the characteristically confessional communication that constitutes the lyrics, Hatchie employs a few of her dance-pop tricks to add massive magnitude to the track. Sprawling synths elevate the track from blue and pleading to bleakly euphoric, and the atmosphere continues as we build to the album’s finale. "Sunday Song" is a gentle respite that’s equally ethereal, and then "Till We Run Out Of Air" takes the levels back up to their maximum to close things off at a gorgeous, glorious peak.

Giving The World Away spins the all too familiar tales of coming-of-age gradually and overcoming obstacles, and it does so with assertiveness. It’s an album unafraid to break new ground, but not without holding onto Hatchie’s familiar musical personality.