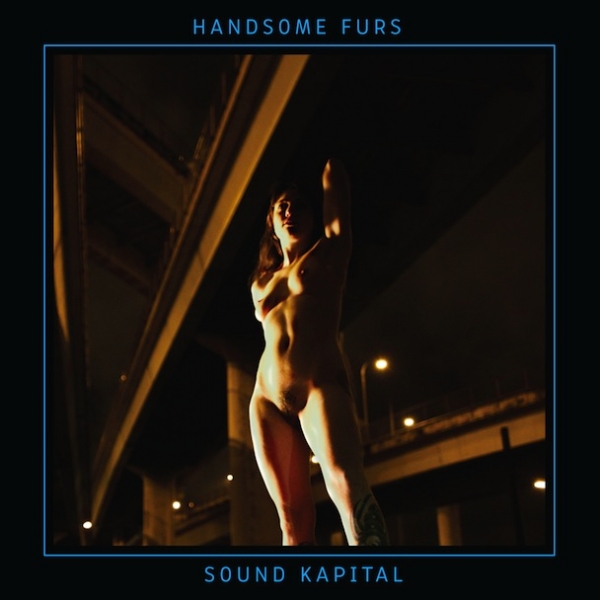 You might’ve heard: Wolf Parade are no more. Yes, the seminal Canadian indie-rockers are on an ‘indefinite hiatus’, to allow the band members a break from bickering and time to concentrate on their side projects. But with frontman Spencer Krug’s head planted firmly up his own arse with his dreary side-project Moonface (their 2010 EP Marimbas and Shit-drums comprised of a twenty minute long soundscape based on recollections of Krug’s dreams…no sniggering at the back, please) it’s up to sleazy guitarist Dan Boeckner to keep the Wolf Parade alumni’s torch lit.

Dan Boeckner has always been a bit brilliant at not giving a damn. His particular brand of grubby, heavy-lidded insouciance has always been Handsome Furs trademark – from the seedy motel make-out promo pictures, to the fashionably anaemic indie rock they peddle. Even Sound Kapital’s artily NSFW cover art screams stylish salaciousness.

But don’t get your hopes up just yet. Sound Kapital’s press release reveals – oh, joy of joys – that this is the only Handsome Furs album written entirely on synths. With the good name of synth-pop irreparably smeared by the likes of Top 40-bothering, bequiffed 80s throwbacks La Roux and Hurts, a little trepidation upon listening may seem perfectly advisable. Oh dear.

But while Sound Kapital may be unmistakably 80s influenced, you’re unlikely to find Boeckner anywhere near a pair of shoulder pads any time soon. With the likes of opener ‘Get Back’ shuddering along in a rush of deliciously gooey disco synths and Boeckener’s throaty howls of “I don’t feel the same anymore” –which comes on like Win Butler tearing off his faux-soviet uniform, smoking fifty Marlboro and gargling a mouthful of gravel. While the track might run on for a bit longer than needed – what should be a glittering gem of a three minute pop song straggles on for 4 minutes 38 – the convergence of dancefloor hedonism and romantic paranoia is as compelling as anything Handsome Furs have ever done. And they get it right again on ‘Memories of The Future’, which finds Boeckner growling “I throw my hands to the sky, I let my memories go” over waspish synths, and on the filthy, low-slung buzz of ‘Repatriated’.

While the static musical backdrop of whirring synths and tinny drum patterns might get a little samey for some, Sound Kapital is a remarkably solid release, managing to lasso the elusive, blissed-out throb of 80s classics without sounding in the least bit gimmicky in the process. With Sound Kapital, Wolf Parade’s baton has firmly been passed.