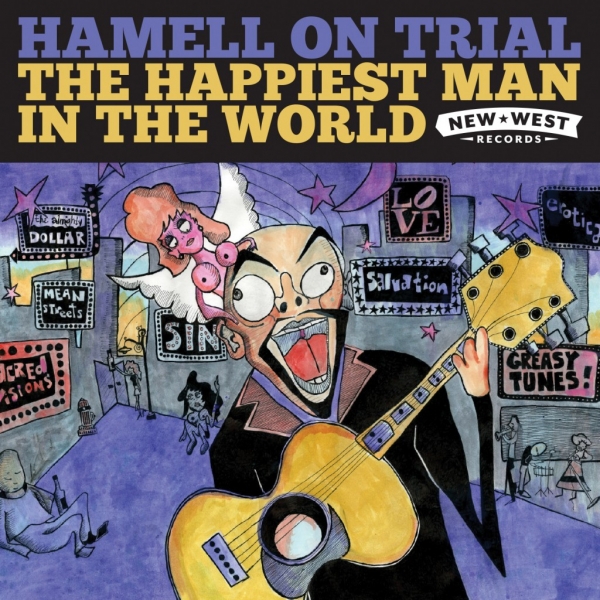 “I recently spent an extended period of time at the Heartbreak Hotel”. And with these words Edward James “Ed” Hamell – the native New Yorker who performs as the one-man travelling show that is Hamell On Trial – lights the touch paper to this his ninth studio record. His first album in six years, the gestation of The Happiest Man In The World can be traced back to the unexpected and, on Hamell’s part, the totally unwanted demise of his marriage of 23 years. This sparked a furious round of activity for Hamell, as he set himself the daunting task of writing a song every single day for 400 days as a means of trying to not only deal with the melancholy he felt, but also as a way of maintaining his sanity.

Yet this is not a classic singer-songwriter break-up album in the way that Bob Dylan’s Blood On The Tracks, John Martyn’s Grace and Danger or Joni Mitchell’s Blue are. From a man who describes his live shows as being 50% about music, 20% narrative, 20% comedy and the remaining 10%, he says straight-faced, is interpretative dance, that was clearly never going to be the case. And having waited six years to release The Happiest Man In The World, Hamell has placed some emotional distance between himself and the abject pain he had originally experienced at the dissolution of his marriage.

What we get instead is a distillation of his live concerts – incendiary, impassioned performances in which Ed Hamell adopts the persona of Hamell On Trial, straps on a 1937 Gibson acoustic guitar, walks out on stage and proceeds to treat this beat-up old instrument like some Gatling gun, cranking out non-stop, rapid-fire folk/punk chords whilst all the while spitting out an incessant barrage of his insightful social commentaries and comedic observations on life like some cross between the maverick English singer-songwriter Kevin Coyne and American stand-up comic and satirist Lenny Bruce. That there are some reflections on the ending of his relationship in there seems at times to be almost incidental.

While all thirteen of the songs on The Happiest Man In The World can be played solo live – Hamell road tests them all in concert as Hamell On Trial before committing them to record – on half of the album he uses a band. His musical collaborators, all similarly inclined, unorthodox artistic outsiders, include his former label boss at Righteous Babe, Ani Di Franco; Kimya Dawson of the Moldy Peaches (who duets with him on the wry knockabout tune that is “Together”); Wammo (former lead singer with the erstwhile Texan roots band The Asylum Street Spankers, who contributes some glorious wailing blues harmonica to “Global Tattoo”); and Brian Wolff (once of the Austin alternative rock band Drums & Tuba) on trumpet and percussion. Together they create a rich musical context in which the characters of Hamell’s songs can live and breathe.

Like Tom Waits during his Asylum years, Ed Hamell’s is a world populated by the disenfranchised; strippers, junkies, bartenders and whores are the only people he seems to know, love and trust. “Bobby And The Russians” is a hilarious tale of a dope deal-gone-bad; the titles of “Whores” and “Jennifer’s Strippin’ Again” speak for themselves. And “Mom’s Hot”, in which his 12 year old son Detroit adds backing vocals, would never pass muster on an progressive diversity agenda. Yet regardless of whether these people are real or imaginary, and for all that their lives are portrayed in wry dark humour, Hamell sings about each and every one of them with a remarkable awareness and tremendous compassion.

Hamell On Trial plays over 200 live shows every single year. The difficulty for such an artist - one whose reputation is built firmly on the passionate, explosive and often interactive nature of these performances - is always going to be how you can bottle this rare essence within the more sterile confines of the studio. If The Happiest Man In The World is to be the barometer of this process then it may just be that the demise of Ed Hamill’s marriage has liberated him sufficiently to enable this to have now successfully happened.