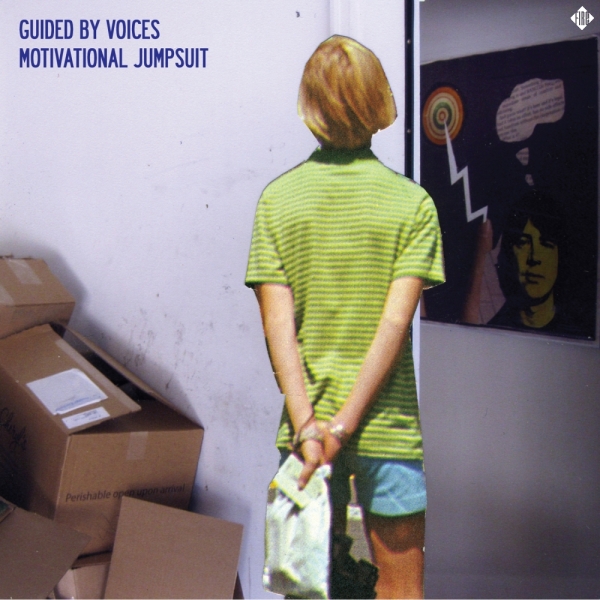 Motivational Jumpsuit is the point where the Guided By Voices reunion gets real. Now, this may sound like a strange thing to say, given that it’s the reconfigured band’s fifth album in two years. But think of it this way – the three albums GBV put out in 2012 were something of a deck-clearing exercise. Last year’s English Little League (mooted by Robert Pollard to be their last) had the group stretching out, diversifying into far-out balladry and freaky soundscapes, alongside Pollard’s patented pop. Jumpsuit sees Guided By Voices playing to their strengths – no song is longer than three minutes, and most of the best barely scrape ninety seconds – and the conclusion is electrifying.

The album opens with an almost autobiographical suite of songs that take in the state of GBV 2k14. “The Littlest League Possible” is an indelibly catchy playground chant – an eighty-second ode to Midwestern manners (“gonna make a big splash – don’t have to talk trash”) and their cottage industry working methods of releasing their own records at their own pace, determined “to be the biggest fish in the smallest pond”. “Writers’ Bloc (Psycho All the Time)”, possibly the least realistic lyric Pollard has penned in years, has Pollard imagining what it would be like if the hits dried up – “I can’t get it out!” he yells at one point, as delay smothers his vocal – before a triumphantly low-key solo draws the song to a hard-rocking conclusion. The theme seems to get picked up further along the album too – “Vote for Me Dummy” is a rock and roll campaign speech as only Pollard and co could deliver, while the stately “Save the Company” is a lighters-aloft anthem for weekend warriors everywhere, with the band determined to pool their efforts for one more show: “she’s nearly dead and buried, but let’s dig her up tonight.”

My theory is that any Guided By Voices album is only as good as its fragmentary interludes – this explains why 1995′s Alien Lanes, which comprises almost nothing but these snippets, remains their most thrilling work. Luckily Motivational Jumpsuit puts a new spin them; “Until Next Time” and “A Bird With No Name” are obliquely hummable acoustic singalongs, and “Evangeline Dandelion” is a hyper-melodic doodle, laced with all sorts of ambient noises and harpsichord tinkles, culminating in an uproarious scream from a mysterious baying crowd. Better still are the five glorious contributions from Tobin Sprout; it may sound like a backhanded compliment to praise someone for unfailing reliability, but when you’re up against someone whose muse is as changeable as Pollard’s, consistency is important. In the case of Jumpsuit, Sprout offers up impossibly sumptuous janglepop (“Record Level Love”), swirling psychedelics (“Jupiter Spin”) and, on “Shine (Tomahawk Breath)”, what can only be described as a stadium rock anthem, as concocted by someone with acute claustrophobia. This, by the way, is a very good thing.

As Guided By Voices go from strength to strength and album to album – hell, Cool Planet (LP number six) lands in May - Motivational Jumpsuit is, as I said, officially the point where the reunion gets real. More importantly, it’s also officially the point where the fact that they ever went away becomes irrelevant. Even with their most straight-ahead record to date, GBV still show that they’re capable of surprises, and no matter how much more they release in the next , will always be worth following.