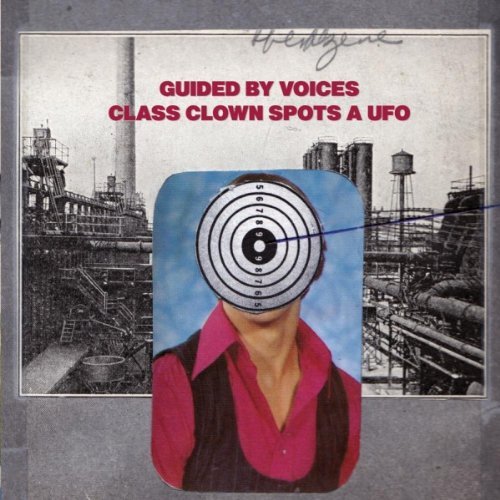 There’s something wilfully provocative about the rate at which Guided By Voices release music. Always prolific in their heyday, the end of 2012 will have seen the release of at least three new albums of music by the rebooted “classic lineup” (the one from 1993-1996 featuring Robert Pollard, Tobin Sprout, Mitch Mitchell, Kevin Fennell, and Greg Demos) following the band’s 2004 split. Leader Robert Pollard, though, has never been one to rest on his laurels and since GBV stopped recording he’s released 13 solo albums, a whole load of records in the Fading Captain series with a variety of collaborators, and five releases as part of Boston Spaceships. All this productivity has always seemed like two fingers up to critics and the music industry, a challenge from Pollard to show that he’ll keep doing whatever he likes – and he’s keeping up the good work with Class Clown Spots a UFO.

You can compare Pollard’s approach to that of Neil Young: an artist who thrives in being deliberately difficult – the electronic experimentation of Trans, or the record-label baiting Everybody’s Rockin’ being two prime examples – and continues to provoke well into his later years. Even now in 2012 Young can’t resist doing something a bit different, even ridiculous: Americana, his album of traditional American standards recorded in a hail of feedback and fuzz with Crazy Horse and a children’s choir, is actually a very fine record that comes close to being completely ruined by the inclusion of ‘God Save the Queen’ (the national anthem, not the Sex Pistols song) as the final track. Pollard wouldn’t do something quite as preposterous as that, but no release from GBV would be complete without a mix of songs The Who wish they had written, brief jams that Cheap Trick would die for, and 30-second lo-fi snippets that should have been consigned to the dustbin of history.

So, following Let’s Go Eat the Factory earlier in the year, the classic lineup throws out Class Clown Spots a UFO, their 18th studio album – 21 tracks that proves nothing really ever changes in GBV’s world. So, we get the two/three minute brilliance of tracks like ‘He Rises (Our Union Bellboy)’, the title track, the high-kicking ‘Keep It In Motion’ and ‘Jon the Croc’; all of which would send Townshend and Daltrey into a red-faced jealous rage; and that’s before we add the sweet jangle of Tobin Sprout-penned tracks like ‘Starfire’ and ‘All Of This Will Go’. But then, as with nearly all GBV records there’s also the pointlessly short (‘Fighter Pilot’ and ‘Worm w/7 Broken Hearts’), the annoyingly aimless (‘The Opposite Continues’) and the infuriatingly-brief-because-they-could-have-been-amazing (‘Chain To The Moon’, ‘Roll Of The Dice, Kick In The Head’, ‘Lost In Space’) which hold the record back from joining the pantheon of GBV greats.

This isn’t the record that you’d start with if you wanted to get into Guided By Voices (those albums are, since you asked: Bee Thousand, Alien Lanes and Under The Bushes Under The Stars, or Human Amusements At Hourly Rates if you want all the classics in the one place) but it’s reasonable stuff all the same from Pollard and Co. Bob still has his place as one of the great song writers in modern music, and he represents the attainability of the rock and roll dream: one moment you’re a 4th grade teacher getting hammered and playing in your covers band, the next you’re a member of one of the true greats of American indie rock. GBV can throw out as many records as they like with as many pointless tracks as they like, because I and many, many others still love ‘em for it.