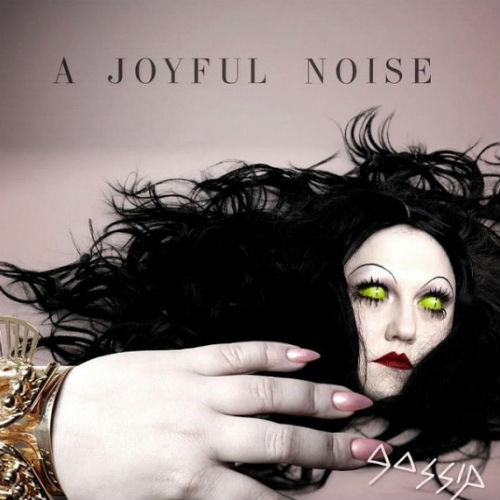 It’s been six years since we as an audience were first exposed to the vibrantly animated American three-piece Gossip. It all started with those oh-so indifferent, quick-paced trailers of a bunch of supposedly rampantly rebellious teens (that are definitely not generalisations, mind…) of Channel 4’s Skins, soundtracked by the band’s debut single, ‘Standing in the Way of Control’. The violent immediacy of the song seemed to mimic the just downright ca-razy lifestyles of these broken Bristolians and set Beth Ditto, Brace Paine and Hannah Blilie on their way to break through the mainstream membrane.

Supposing that the best things in life come in threes, this threesome is led by one hell of a sergeant major. Unconventional Southern belle, Beth Ditto rules these parts, her overwhelming authority clear as fresh filo pastry with a raw, soulful voice contrasted against an alluring punk-like stage persona and presence. Since releasing four studio albums, the band are back with A Joyful Noise - a well-behaved, disco-dancing, distant European cousin, compared to the feral and extravagant previous releases, that gently gnaws through its inner workings, stopping just short of penetrating and piercing through the surface. With disco music brought to the spotlight once again through the tragic recent deaths of legends of the genre, Donna Summer and Robin Gibb, Gossip have inadvertently chosen an ideal time to release A Joyful Noise, which tests not only themselves as a band, but also the validity and endurance of the genre.

Produced by Brian Higgins of pop hit machine, Xenomania (responsible for some of the exasperatingly catchy hits of Kylie Minogue, Girls Aloud, The Sugababes), it’s no surprise that A Joyful Noise is by far the most pop/disco influenced album the band have made in their thirteen years of existence. Beth Ditto described the album herself as “A Brian Higgins Gossip album”, while reassuring fans that her transition from rebellious punk to disco diva was “a natural one”.

During the making of the record, Ditto went through the tragic death of her father and the breakup with long-term partner, Freddie Fagula. Unlike previous Gossip records, love and loss is a significant theme of A Joyful Noise and the record is quite obviously influenced by the unconscious mourning for both of Dittos’ losses. ‘Move in the Right Direction’ acts almost like a self-help tape, ultimately creating a fun and motivating booster, trying to make a bad situation more bite-sizeable as Ditto belts out “Keeping my head up, looking forward/Reminiscing will get you nowhere”. The eye-catching video’s minimalistic colour schemes also shows how Gossip have been moulded and nurtured into pop music, complete with a dance troupe disguised as futuristic scuba divers.

Despite this clear disco dominance, first track ‘Melody Emergency’ has a recognisable, repetitive, Gossip riff that gently eases the listener into the evolution that progresses throughout the record. The sluggishly seductive and grimy bass line contrasts beautifully as Beth Ditto’s hoots and howls bask in authority. Heavily ’80s- influenced keys lap up the attention like a playful puppy in ‘Get Lost’ and ‘Perfect World’, whilst Motown attempt ‘Horns’, with its slap bass and yep…horns, sounds like it belongs to some kind of ’70s upmarket porn. I’m half expecting a sleazeball with a dodgy moustache and a mirror ball medallion wrapped around his neck to interrupt with “Hey there, you can have a go on my horn”.

A Joyful Noise has had a mixed reception from the broadsheets and music press so far. Yes, the lyrics aren’t the most innovative; the disco beats are at times pretty vile, but it’s a different direction for Gossip and sometimes change is difficult to swallow. A Joyful Noise is an adapted and evolved pop creature from Gossip. It floats through a sleepy nostalgic dream of past influences and puts the punk and liveliness aside for the time being. Donna Summer said that “God had to create disco music so I could be born and be successful”… I’m just not sure that this is the case for Gossip.