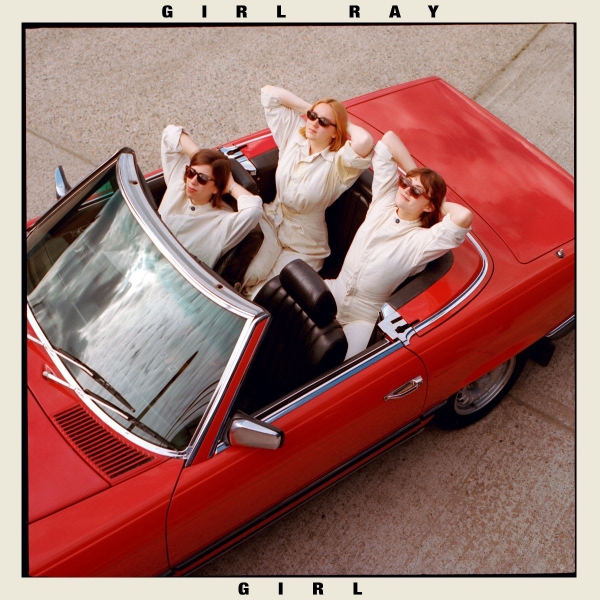 Upon realising that their own Spotify playlists consisted primarily of pop, Girl Ray took the decision to dial down the guitars from their twee indie debut, Earl Grey, and up the synths for their new release, Girl.

Despite referencing influence from sources such as Ariana Grande, which physically manifested itself in the form of a shrine dedicated to the “thank u, next” star, the trio’s second record is largely indebted to the sun-kissed pop of acts like Haim and, at times, The Beach Boys. As on their debut, primary vocalist Poppy Hankin’s vocals lead the way with a star performance. Her alluring deadpan delivery adds an understated playfulness to opener “Girl”, evoking the electric naivety of young love with lyrics such as “I love the way you work that room so cool” and “Would you be my girl / You know you’re my world”. Her tone is more sensual on “Keep It Tight”, a track which totally bangs with its chorus and suggests the transition to pop may have been a move in the right direction.

The track isn’t without its faults however, and its clunky transitions allude to the strange songwriting decisions made throughout the record. For as many moments as the band, alongside producer Ash Workman (Christine and the Queens, Metronomy), manage to imbue their sunny pop take with moments of real energy (“Girl”, “Friend Like That”), there are others where they indulge in some odd musical flourishes. A notable fiend on this front is the returning woodwind instrument featuring on “Because”, “Let It Go” and “Go To The Top”. Sounding more broken than whimsical, it sounds contrived and half-baked. Elsewhere, PSwuave’s appearance on “Takes Time” similarly juts out as a moment of poor judgement. A jarring introducing following the dainty intro, her inclusion feels forced and lacking purpose, a shame considering Hankin’s gorgeous vocals in the chorus and second half of the track.

Nowhere is this better exemplified than on the closer, “Like The Stars”. Here, Hankin is concerned with detailing the life-affirming act of declaring your love for another person, expressed via expositions such as “I’d write a book about all the things I like about you / It’s kinda hard when I want you like I do”. After detailing her need for this other person, however, the song loses its way amid a messy marriage of strings, guitar, drums and keys, leaving its listener underwhelmed and starkly aware something went amiss.

If Girl Ray’s transition to pop was consistently as nuanced as the start of “Like The Stars”, it would unquestionably be lauded as a risk worth taking. It’s the moments of clumsy transitions, erratic woodwind inclusions and underwhelming choruses however that throw some doubt on that suggestion, but there's still much to love on Girl.