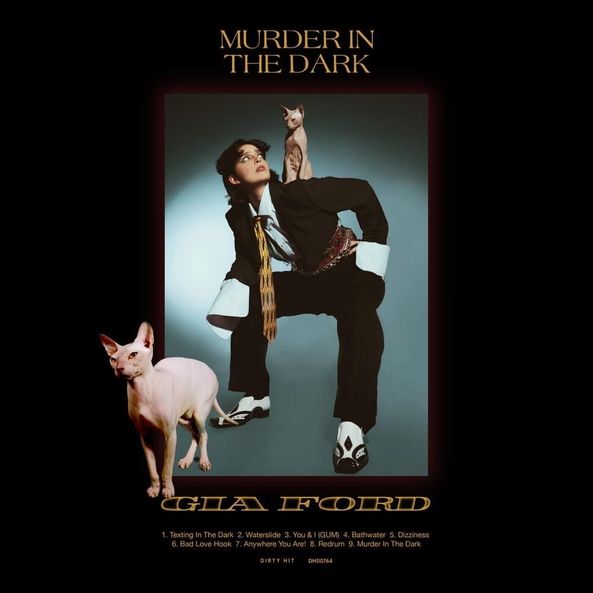 ​Gia Ford’s debut EP Poster Boy gave the world a snippet of what she can do.​

Masked by a slightly brighter disposition, it told the story of her own evolution from Instagram protégé to a new, shiny pop prospect from the diverse Dirty Hit roster. Latest EP Murder in the Dark tells a very different story.

There are plenty of elements within this EP that could give it a horror movie comparison. The creak of a door that leads to the ominious scream introducing “Waterslide” – a track that sounds like it has been dragged straight from an 80s thriller. The way short and snappy interludes intertwine with lengthier melodies. Ford’s soulful tone also gliding across tracks with a freakish ease.

The EP’s over-riding theme is the theme of exploring the human condition, which Ford narrates in her own unique way. The drunk and dizzy “Bathwater” sampling “Waterslide” and completely turning it onto its head, with the help of fellow Dirty Hit signee Bathwater 404 (404 Guild), whilst “Bad Love Hook” draws a level of deeper melancholy into the mix. Ford’s ability to write a stand-out pop song has not diminished here, with title track and album closer “Murder in the Dark” being a prime example of her talent.

A sonic spectacle which lets the mind conjure up some fantastic visuals, Murder in the Dark pinpoints Ford’s creative progression and pure individualism. With a Tarantino-esque soundtrack vibe, an air of suspense runs throughout that leaves the listener intrigued but, more often than not, surprised.