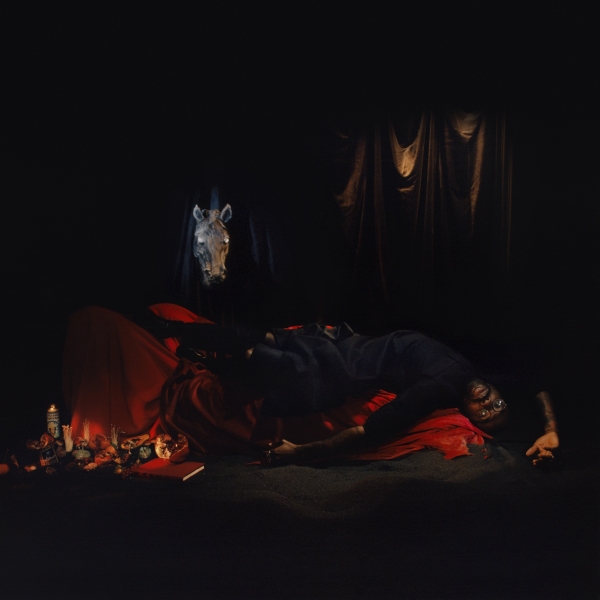 This may be the definitive quarantine album.

Not that it was planned like that, of course, written and slated for release long before the Great 2020 Pandemic was even a glimmer in a wet market’s eye. But Obaro Ejimiwe (Ghostpoet) has long made a stock in trade of neatly dissecting modern malaise. The world was already reeling from a heady cocktail of Brexit, Trump, and alt-right memes. Already spending too long indoors, too shackled to the screen. To be confined, glued to the news while the unseen apocalypse rages outside, only serves to bring Ghostpoet’s aesthetic into focus, as the album scratches at a wound now uncovered.

And this is stylistically his most clearly defined work to date, as he takes the reins on production for the first time. From the outset on “Breaking Cover” the change in tone is marked. Tight strung bass and spiky guitar. The emotionless, post punk machine of I Grow Tired But Dare Not Fall Asleep seems such a natural fit to his half spoken half sung delivery, and relentless pessimism, that the only surprise is that this is ground hitherto untrodden.

But while the original wave of post punk raged, focused, against the collapse of social democracy, Ejimiwe paints both society and democracy falling apart. Without this clear enemy, the latent rage can only be expressed as unmoored, existential angst. Gang of Four hedonistically raged “To hell with poverty / We’ll get drunk on cheap wine.” On "Breaking Cover" we cling to the only thing we can: "I am alive / you are alive / we are alive / they are alive / because of the fleas / itching the love / shouting above / the din of the crowd". By the next stanza, even this is undermined: "I wanna die", he intones.

Subtle touches throughout deepen the mood. "Black Dog Got Silver Eyes", is perhaps the most disquieting track, featuring many of the noises which trigger animalistic fear in a good horror movie. But it’s the layered voices, pitched up and down which disturb most: like the fevered dreaming of an overstimulated mind; asleep down the youtube rabbit hole.

The restless anxiety brought on by life online is a recurring theme. Our short attention span on lead single "Concrete Pony": "Why ain't my jacket like yours / desperate I'm needing applause / how can I measure my life? / emails and digital likes”. And the scars of the title emerge throughout "Social Lacerations", a dissection of a selfie culture which slowly poisons the mind.

In the present context, I Grow Tired But Dare Not Fall Asleep seems like the prophecy of a late-capitalist Nostradamus. Brilliantly produced, thematically solid, prescient, insightful and witty: it tackles with aplomb the paradoxical themes of isolation and overconnectivity, anxiety and the seeming proximity of death. And here we are sitting at home, certainly, feeling the same. Trying not to listen to the little part of us saying that this was coming, somehow. As he says on "Humana Second Hand", his paean to isolation: “Home alone / ‘nother film / bottomless / so what becomes of me?”.