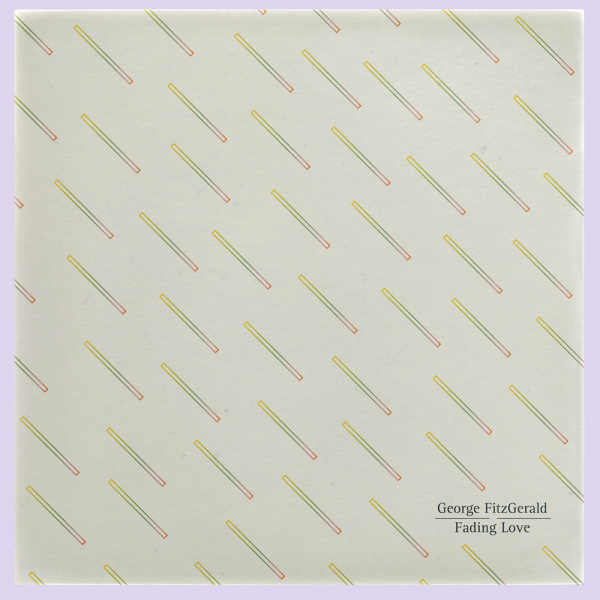 It’s five years since George Fitzgerald released his first single “The Let Down” on Hotflush Recordings. It might have either been the track’s nervous shuffle or the label association, but Fitzgerald was instantly likened to Joy Orbison (also of Hotflush) and heralded as part of the vanguard of producers at the business end of what was unfortunate enough to be termed ‘post-dubstep’. He’s been opening up new frontiers for himself ever since, with the Shackled, Silhouette, Child and then Needs You EPs across 2011 and 2012 racing through amalgamations of UK garage, sparse bass music, house, and most recently the breathless techno of “Needs You”. There’s no doubt about it; Fitzgerald has always moved with the times, but his debut album Fading Love is a bigger leap than any he’s attempted before.

Whenever an album is introduced with a bold conceptual statement, you know you’re not in for forty minutes of breezy hooks – Fading Love is no exception. Apparently conceived in isolation in summer 2013 on the least introspective island of them all, Ibiza, the title refers to both a crumbling romantic relationship and his disillusionment with club music’s lack of aspiration. That sound of decay wracks Fading Love’s murky, techno edged textures from start to finish; even the melody heavy (and quite brilliant) lead single "Full Circle" turns out to be morose on closer inspection, detailing as it does with the maudlin feeling that follows the break-down of a relationship that held so much promise. It’s that trick of turning the reflective and sullen into something on the outskirts of dance music that you want to lose yourself in which is such a difficult trick to pull off; and when Fitzgerald succeeds here, it vindicates all of his restless ambition.

There are more than enough of these moments to immerse yourself in. Album opener "About Time" makes that case early doors, throwing together its gloomy rumble with Boxed In’s yearning vocals and the eventual snapping into life of a metronomic pulse of a beat. "Full Circle"’s bouncing synths perfect that intersection between euphoria and ennui, again driven along by Boxed In’s weary, almost drawled vocals. Those two moments with Boxed In turn out to be a couple of the album’s strongest, but that’s not to say that Fitzgerald is propping himself up with guest vocalists here.

Take the sombre techno shuffle of "Your Two Faces", which sounds like the sort of thing that should be pumped out to an assembled crowd of hopeless romantics at the Berghain, hammering away with pent up fury. Similarly vocal-lacking and impressive is "Shards", which is perhaps the most recognisable Fitzgerald on offer here, evolving from a suggestive smattering of synths into a throbbing, sturdy hit of dark techno that FitzGerald keeps proving he's such a master at constructing. These highlights are hardly going to be this summer’s club anthems, but that’s entirely the point; he isn’t openly courting you onto the dancefloor here, instead concentrating on nailing down real human emotion.

As you might expect, such a bold step into the unknown is bound to lead to a few less inspiring moments. Take "Call It Love", which melts into a haze of wandering synths, while earnest vocals insisting "If you want to call it love, you can call it love", don’t quite add the emotional heft that the track is clearly aiming for. "Crystalize" suffers from that same listlessness, failing to really differentiate itself either in an instrumental or vocal sense, lacking that synergy and cathartic gut-punch of this album’s more inspirational moments.

The irony surrounding Fading Love is that when Fitzgerald’s first track for Domino, "I Can Tell By The Way You Move", was released back in 2013, it had a small minority of house and techno purists vocally denouncing the foul commercial music that Fitzgerald was now apparently making for his satanic new (independent) label overlords. Translated into sane English, they were seemingly complaining that it was both unlike his releases on Hotflush and Aus, and peppered with soulful melodies that propelled it towards a wider audience. They were wrong to assume that Fitzgerald’s move to Domino was a commercial gambit: in fact, it has seen him move in the opposite direction, into murkier, more troubled territory, in an attempt to create something really artful. More often than not, he succeeds, but occasionally a few of those hooks so reviled by his critics could really lighten the load that comes with all that emotional baggage.

That said, Fading Love’s raw and unapologetically personal techno-hued tracks do mark something of a departure from a scene that FitzGerald is right to criticise as being occasionally one dimensional. Life, unfortunately, is not all boat parties and weekend hedonism, and FitzGerald deserves a lot of respect for mixing the seemingly irreconcilable in electronic escapism and weighty introspection. By stepping into this unfamiliar territory, he’s not only proved that he’s the dynamic and hugely talented producer that those early EPs hinted at, but he’s ended up just inches away from making that record he’s aiming for; something that’s as bleak and evocative and affecting as it is strangely danceable.