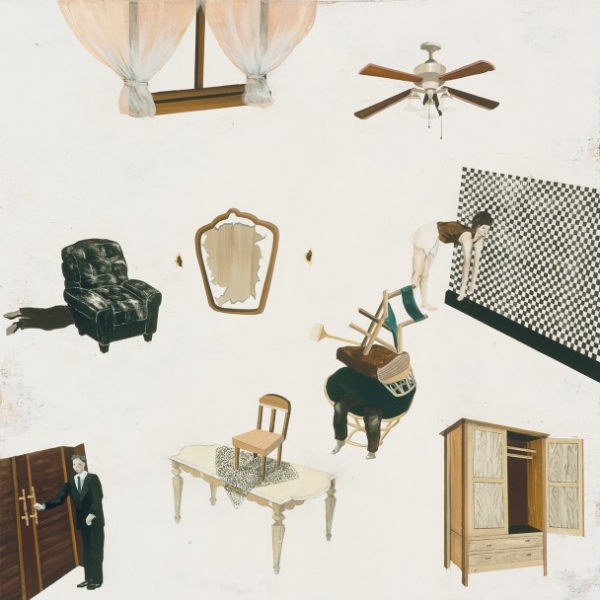 In 2011 Boston duo Gem Club released Breakers, an album which was neither flashy nor boisterous but whose understated charms attracted a well deserved slow-burn acclaim as listeners fell under the spell cast by its minimal ornate elegies of piano and cello. A large part of the charm lay in the deceptively simple melodies which felt both remarkably intimate and yet removed from the mundane and unimaginative that often comes with such directness.

Despite the abstract influences shown on the cover-art of In Roses, they’ve retained that simplicity, and this second album is an exercise in refinement rather than revolution as the group (now expanded to a trio) add layers of ambience to those hushed ballads. Intro track “” does a good job of introducing that more pronounced element as swells of treated cello coalesce to subtle dreamy waves, and similar beds of frayed ambience are thread throughout the album to offer a neat counterpoint to the rich sound of Christopher Barnes’ piano playing and gravelly voice – the two work seemingly in perfect tandem as Kristen Drymala’s rhythmic cello drones in a sort of hymnal fashion which means it’s several listens before you even really notice the lack of a traditional rhythm section. That also makes the rare appearance of drums on tracks like “Soft Season” all the more dynamic, and it’s the reverb laden thud in the shadows of “Braid” fuelling one of their best tracks to date.

The soft and spacey production aesthetic might draw some comparisons to The XX because each instrument is similarly isolated and given plenty breathing room, sculpting a naturalistic sound with a calm poise which is all too rare a find in bands relatively early in their career. For some it might be quite easy to hear a Gem Club song and too slap a boring ‘soppy and serious’ label on it, and there’s certainly a bit of that but there’s much more – the songs move with a gracefulness which elevates them above that, a quiet craft in their movement which is often beautifully reflected in their artful music videos.

Given their style of playing most of the songs do move at a fairly glacial pace – and the lack of dynamism may be a sticking point for some – but there are extra flourishes to keep things moving along that were arguably missing in their previous work. The mechanised backing vocals on tracks like ‘Hypericum’, the subtle bursts of static on ‘Idea for Strings’ or the rare electronic swells of lead single “Polly” all add colour to the songs and point towards a fusion between electronics and their more classical impulses as a potentially interesting future direction.

In Roses is about as composed and graceful as second albums come, and it confirms Gem Club as a band completely in tune with their own objectives. These are not songs which will not change the world, and they will probably never be a huge band – but songs as beautiful and honest as these will always be huge for some people.