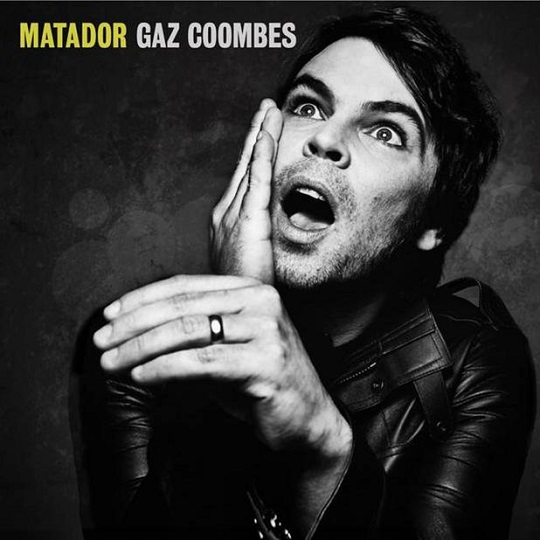 For all their giddiness and fun, Supergrass always had an innate credibility. Whilst they emerged in the hedonistic and narcissistic Britpop scene, they simply did their own thing and admirably focussed on the old fashioned values of songwriting, musicianship and totally got the importance of being a gang. They also knew when it was time to call it a day, leaving frontman Gaz Coombes to write by himself for the first time in a 20 year career. When he released his first solo album, Here Come the Bombs in 2012, he could have rechristened himself “Gareth” and cut his ties with the youthful, outrageously side-burned singer of his effervescent past, but of course he didn’t - that would have been completely out of character.

His second solo record Matador sees him wrestling with getting older, being bewildered by contemporary politics, drifting into blissed out nostalgia and aging rather well. On the cover, shot by Rankin, he still looks like a youthful urchin. Matador is certainly the most experimental record of his career, with its loops, samples and gospel backing vocals, it’s much sparser than anything Supergrass recorded, but he hasn’t severed all ties with his past, songwriting is still at the heart of the record. It also sees him in a one, rather than three man army, given that he played most of the instruments himself, with some help from others, including Loz Colbert of the soon to be reformed Ride, who drums on four songs.

Opener “Buffalo” starts off portentously, the staccato piano chords underscore words such as “A giant leap into the dark, I wish I could jump to the start.” It sounds incredibly melancholy – though certainly not morose – and the stately, sombre pace is pierced when wailing voices appear, amidst Coombes screaming "Because all my tears fall like sand", then it changes pace again, shifting into a lovely string and acoustic guitar outro. It’s a tremendous combination of beat, tune and melody.

Recent single “20/20” starts off like something from a Disney film, with a delicate piano line and beautifully ghostly coos creating an atmosphere of midlife angst. “Who am I? Who am I? I couldn’t operate, God knows I wanted to.” As with many of the songs here, he uses the samples to shift the gears, it mutates into something much more muscular, with acoustic guitar and drums powering the second half of the tune.

But it’s not all electronica, he cheekily appropriates David Bowie with “The Girl Who Fell To Earth”, it’s elegiac, wistful and sugar sweet, creating a similar feel as John Lennon’s “Woman”, a campfire story of love. “Seven Walls” uses his new found love of minimalism to great effect, creating a tale of starry eyed devotion, with a torch singer croon that’s wonderfully romantic, “Let’s walk down to Jericho, share a little smoke.” It’s a nostalgic night time trip through his hometown Oxford.

“Is it On” is just over 30 seconds of Coombes’ speeded up voice saying “OK, is it on, is it on?” on a loop, with some jaunty piano in the background, which leads into the title track “Matador” that clocks in at just under 90 seconds, featuring just his voice, drums and keys. It’s a story of defiance, ending with the marvellous line “I faced the beast and fight like a matador” and then it’s over, a wonderful bookend to an album of precision, accuracy and conciseness.

Gaz Coombes may be using less orthodox arrangements and instruments, but here he sounds like how one would imagine Nick Drake would have done if he were making records 2015, adapting and evolving with technology. It’s also a reminder of that wonderfully underrated voice of his, which can mix melancholy and joy and interestingly his voice hasn’t changed that much, but the narrative in which he’s singing imbues it with more gravitas and depth.

Matador is a great record, the sound of an artist following his own singular path - an artist who becomes more interesting with each release.