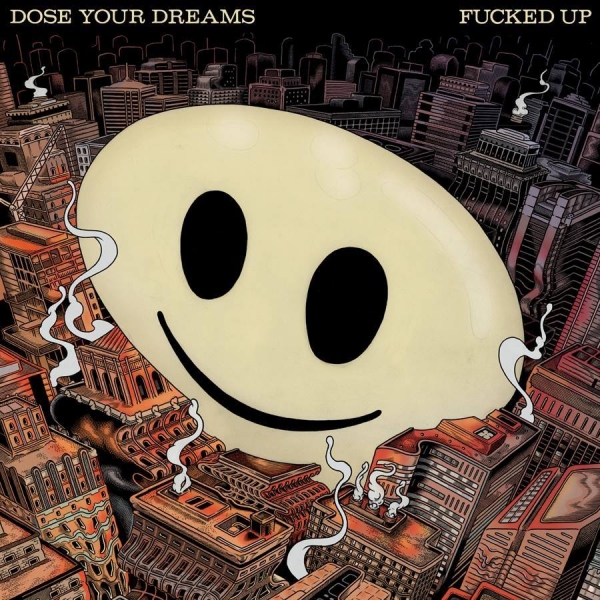 Fucked Up have long ceased allowing themselves to be defined by something as stifling as genre.

Time and again they have shown a flagrant disregard for any implied constraints of being a punk band; consistently bending the genre to their will, never as ostentatiously perhaps as on their third album David Comes To Life, the rock opera opus often viewed as their definitive statement to date. 2014’s Glass Boys, while excellent, found Fucked Up returning to a more streamlined, pummelling beast. However anyone expecting more of the same from Toronto’s shapeshifters are set to be shaken from their stupor by Dose Your Dreams. David’s back, and with him we are about to tumble head first down a warped portal into a psychedelic odyssey.

Fucked Up have once again embarked on creating a record of breath-taking scope and ambition. In a seemingly unending ascent, Dose Your Dreams is yet another jump into the unknown where the group not only flirt with other genres but jump in, break them down and rebuild as they see fit before emerging unscathed from the mire.

Mundane miniature is of no interest here. David, shackled to a desk job, meets Joyce who implores him to take her hand in order to give him a glimpse behind the curtain of life. Thus throwing him into a quizzical disarray where nothing is as it seems and he questions everything he ever knew. Along the way he is forever changed as Joyce pulls the chain on the lightbulb of his life, illuminating hidden truths and proposing questions with no answers.

Hope in the pursuit of ones dreams is a key theme of this album. Throughout the records twists and turns you are left constantly questioning; what are we without hope? Without dreams to chase and fulfil? How does one grow if you do not question the fundamentals of life?

With Mike Haliechuk this time solely responsible for writing lyrics and sharing song writing duties with Jonah Falco, Dose Your Dreams could, on paper, look like a relatively singular vision. But in reality it is an album of multiple personalities and voices which only adds to the blissfully disorientating psyche of the record. Damian Abraham, the group's towering frontman, is absent from a number of tracks while shares vocal duties on others. However this by no means diminishes his presence. On the contrary when he does take centre stage he is more visceral, commanding and powerful than ever. His broken glass growl scintillates like a raw nerve. Even as things get weird, and on this record they definitely do, Damian’s voice will always be the vital tether to the genre that bore them, the infallible line that marks them as outsiders, stomping down the door of the mainstream.

Dose Your Dreams' stylistic gymnastics take a moment to reveal themselves. As the hedonistic rush of guitars crash in the one two punch of “None of Your Business Man” and “Raise Your Voice Joyce” you feel that you are in comfortable territory, even with the borderline ska saxophone accompaniment. However the tripped out shoegaze wanderings of “Tell Me What You See” soon unsettles any feeling of familiarity, acting as a forbearer of what is to come.

“Normal People” enters with a baritone monologue, recalling Matt Berninger at his most seething and critical, before sliding off its bar stool into a bluesy rock stomper infused with Stardust era Bowie swagger. This is all before the smooth bass and R’n’B piano breaks of “Torch To Light”, psychedelic wig out in the outro of “Talking Pictures” and the fuzzed out nasal grunge of “The One I Want Will Come For Me”.

The swampy electronica of “Mechanical Bull” with its seedy nightclub sprawl and dystopian squelch is perhaps one of the boldest moments on Dose Your Dreams. The glitchy twitches escalate from unsettling to near terrifying by the time Damian is howling “What is this around my neck?” as the track draws to a close. And as if all of this wasn’t enough, and this is a sentence few including me would have ever expected in a Fucked Up review, they even get funky on the title track, and in what must be of at least some irritation to their peers who at this stage are just trying to keep up, they pull it off unflinchingly.

Many would expect an epic of this scale, 18 tracks at close to 90 minutes, to drag. But as Owen Pallett’s strings swell on “Joy Stops Time” you long for the moment to linger a little longer. Like all the best dreams, you're not quite ready for it to be over just yet. There may simply be too much ambition crammed within this record for some to digest or make sense of, but for those who grasp the hand outreached to them and dare to scale the heights, the rewards are limitless.

Fucked Up’s personal narrative draws an uncanny parallel with that of Dose Your Dreams. In creating a tale of dreaming big and clinging on to hope they are living out their own script, refusing to be bound or compromise in the creation of their art. The importance of dreams cannot be understated. They give us aspirations, purpose, and even if never realized, allow us an escape from our day to day lives. For me that is what this record is all about. So go and get lost within it, be unafraid to dream big and return changed, reignite your passion and hope.

As the hi-hat snaps in on “I Don’t Wanna Live in This World Anymore” and the duelling guitars start to feel each other out Damian snarls “The key to life is finding your joy”. Whether you take this line as merely part of the wider narrative or as a bolder standalone statement is left up to you. This is exactly how it should be. This is Fucked Up.