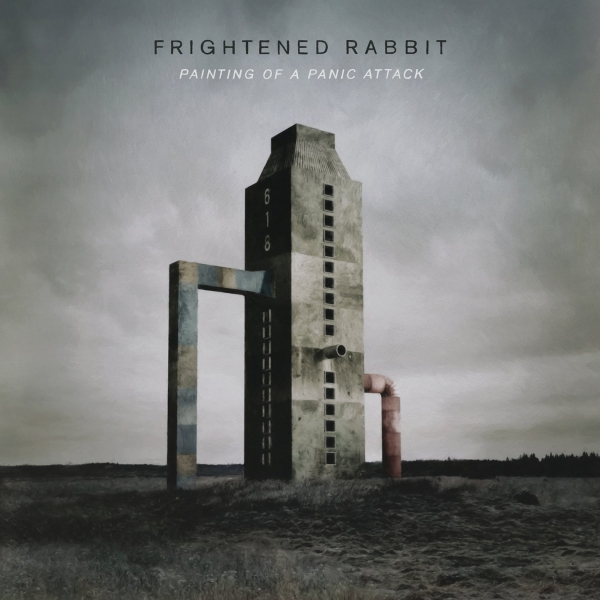 There’s something frighteningly exciting about deciding to up-sticks and move to a completely alien city. It’s that rush of having a whole new world overwhelmingly laid out in front of you to explore that makes moving somewhere unfamiliar something everyone needs to do at least once.

But, when that desire to go back to what you know so well, what’s comfortable to you, strikes, you can quickly find yourself picking apart everything that’s wrong with your new home. The smallest frustrations, that you would’ve otherwise brushed off back home, become the bane of your life, and what you were once so excited to explore becomes so vast and somewhat oppressive you feel detached from your surroundings.

So what do you do? For Scott Hutchison, you use that alienation with the new world you find yourself in to write an album. Painting of a Panic Attack is Frightened Rabbit’s fifth album and, with the help of The National’s Aaron Dessner, might just be their most emotionally mature and rich.

It’s been almost ten years since the first release of their debut, Sing The Greys, and in that time it’s clear that Hutchison has been through the ringer a fair few times. From realising drunken one night stands aren’t the way forwards on Midnight Organ Fight’s “Keep Yourself Warm” to the life-affirming experience of love on The Winter of Mixed Drinks’ “Living In Colour”, Frightened Rabbit have somewhat cornered the market on goose-bump inducing stories. Luckily, Hutchison’s lyrics still have the ability to send shivers of recognition down anyone’s spine here as they did ten years ago.

Much of Painting of a Panic Attack is inspired by Hutchison’s recent move from Scotland to LA, a real shift in scenery if ever there was one. It deals with the anxiety of leaving friends (and fellow band members) back home to explore a new place he discovered he wasn’t particularly fond of. That detachment is ever present throughout the album and brought to life with Hutchison’s particular lyrical mastery.

Take, for instance, album opener “Death Dream”. Hutchison has a way of making lyrics filled with a somber directness still feel like they’re shrouded in a fog of uncertainty, as though he can see the outline of shapes but is just unable to make it a whole. As he sings of the “tinnitus of silence”, it sets the tone perfectly for Hutchison’s state of mind for this album: confused and lost yet hopeful that an exit might be nearby and ready to keep searching for the light.

He paints a picture of a seedy, noirish LA on “Lump Street”, contemplates getting older on "I Wish I Was Sober" and, once again, mines the idea of being your own worst enemy on "Break". Each track is filled with Frightened Rabbit’s usual poetically blunt explorations of the darker side of life. As much as they often retrace their thematic steps, they still find new, beguiling ways to do so.

Though Hutchison’s talent for crafting beautifully dark stories hasn’t changed much, Frightened Rabbit’s sound most definitely has, thanks in part to Dessner behind the mixing desk. The usual aching melancholy that has the capability to flip to captivating exuberance at a moment’s notice is ever present but Dessner’s experience with The National gives a whole new, often gloomy, depth to their sound. His fingerprints are visible, as with the ominous buzzing like flickering street lamps on "Lump Street" and the explosive shoegaze guitars that signal that fantastic chorus of "Get Out" that bring to mind some of the best moments from Trouble WIll Find Me. And yet he still gives enough room to allow Frightened Rabbit’s unique sound breathe. Dessner is simply there to give their sound a leg up and it works wonderfully. This does come at a cost, however, bringing the pace we’ve come to expect from the likes of “Nothing Like You” or “The Woodpile” down a few notches to create an album that’s altogether a lot more of a slow burn than normal.

Having said that, though, Painting of a Panic Attack is still an album to be cherished. A combination of new life experiences, that allow Hutchison to weave more vivid tales of mourning, nostalgia and, ultimately, triumph, and the shot in the arm that is Aaron Dessner giving the band that little bit more has helped to create an album that could rival Midnight Organ Fight. Just as Frightened Rabbit felt like they were starting to fall into a bit of a rut, Painting of a Panic Attack arrives to remind why they are such a special band. They’re not giving in just yet and thank goodness for that.