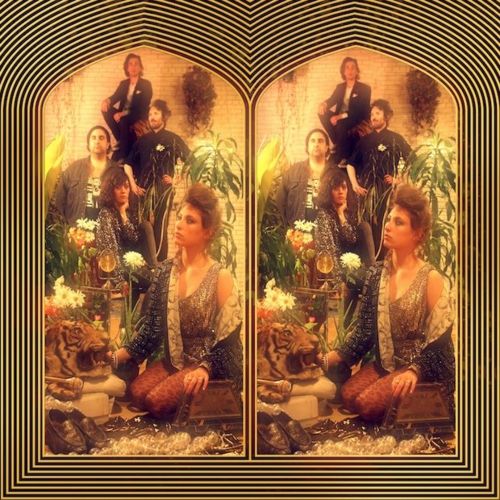 Curious one, Friends. Deserved darlings of the indie community they might be, but if one was coming at Manifest! from a position of no context, it sure as hell would sound like a pop record. And not “pop” in the sense that guitar geeks mean when they say things about bands like Yuck such as “they’re really good – for a pop band”. I mean an actual pop record, one consisting of songs that someone like Katy Perry would desperately love to have tackled. Throughout playing it, the uninitiated listener can’t help but think that’s more suited to the Radio 1 A-List than it is amidst Shellac and Liturgy on the 2012 Primavera Sound line-up.

So why is it ours and not theirs then? Because, as mentioned, Friends really are a curious one, and scratching the surface reveals more to them than the jaunty melodies and invigorating funk that you’re initially confronted with would suggest. Lyrics like that of the chorus to opener ‘Friend Crush’ (“I want to ask your advice on a weekday, I want to plan something nice for a weekend”) are just not the kind of line that regularly pops up in other pop songs, and it also helps that they take their cues from the cooler side of the medium that most indiephiles agree over the merit of. Strange though it might sound, believe me when I say the excellent ‘Sorry’ shares a lot in common with ‘Joe Le Taxi’ by Vanessa Paradis, and elsewhere ‘A Thing Like This’ could slot nicely on to Neneh Cherry’s Raw Like Sushi. I guess this is what your band sounds like when you grow up spending as much of your time paying attention to that kind of stuff as you do Nirvana.

Of course, like any pop music worth listening to ever, Manifest! takes a page from the book of Prince, or more accurately a couple of chapters. The sparseness of the arrangements and love of a funk-indebted baseline owe a lot to The Purple One’s most purple patch, especially Sign O’ The Times and Parade. And if it feels like I’m spending too much time comparing Friends to other musicians when I should be focusing on the band at hand, well, therein lies Friends’ one and only problem.

This being their debut album, it’s entirely forgivable that Friends’ own personality is yet to really come to the fore. What we can be thankful for however is that the slight final third slump and more derivative numbers like the comparatively uninspired ‘Ideas On Ghosts’ are easy to forget when there are a few songs in their canon at the standard of the aforementioned ‘Sorry’, summer-in-a-song number ‘Home’ and this very publication’s favourite song of 2011, ‘I’m His Girl’. The latter in particular is still stunning: a detailed analysis of what sounds like the perfectly balanced romantic relationship over a backing that Tom Tom Club would have high-fived themselves for creating.

There I ago again. Alas, I don’t think I’ll be the only person who won’t be able to help themselves when it comes to discussing other bands whilst analysing Friends at this early stage of their career. At least, however, you’re only really able to reference other really good music when doing so. That’s very much to Friends’ credit, and bodes well for a time when they allow their own distinct musical traits to come to the fore a little more in future releases. For summer 2012 at the very least, this will more than suffice.