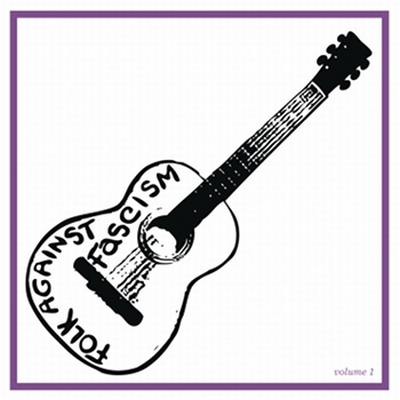 I got asked to join this Facebook group a few weeks back (it’s called, wait for it: ‘It’s funny how our flag offends you but our benefits don’t!’) I idly checked to see how many people were members (yeah ok, make with the Pete Townsend comments) and nearly threw up – more than 500,000. I checked back just now and it’s up around 630,000. I can’t decide if I’m missing some great sledgehammer of irony here. Are there really that many people willing to have their name and photograph associated with a group with such a sub-tabloid name, and with such awful Daily Express approach to such a complex subject? It struck me after seeing this and being asked to review the new Folk Against Fascism album that organisations such as these, whilst having honourable intentions in going after the snub-nosed stupidity of the BNP, – who have of course attempted to co-opt folk music into their confederation of ineptitude – have a far greater enemy in their midst. Namely those who remain politically demotivated – and would probably never vote for the BNP – but who are nevertheless caught in the broad pulse of that low-energy recourse to dull received opinion peddled by the mainstream press and media. Fascism might be a daft overstatement for it, but it is a dull, passive bigotry that seems to be becoming more pervasive all the time. I feel it like a chronic societal ache.

So what can an organisation like Folk Against Fascism do about such a situation? Not a whole lot is my guess. Despite all their success, it’s hard to work against passivity. Folk Against Fascism was originally set up as an awareness thing, to combat the co-opting of folk music by the BNP. Nick Griffin had been on record claiming various folk singers and groups as among his favourite artists. BNP activists were sent out to folk festivals, seeing them as hotbeds for nationalism and places to inculcate nationalist fervour against the ‘growing power of Islam’. The BNP in their nuanceless, monolithic manner, sought to exploit the sense of heritage and belonging implicit in the ancient chords of British folk music for bigoted means – culture and history as a form of insulation and protection. And there is a double bind at the centre of the continuing revival of folk music and folk traditions, or at least the potential for a double bind. When its meaning and importance are hyper-inflated – instead of considered as merely part of an ongoing history – then you witness the kind of thoughtless, belligerent frothing you see in all nationalist movements. FAF would argue that one celebrates it merely for what it is – a living example of our connection to a shared past. It needn’t be whipped or shaped into anything more.

So what of the music? They’ve assembled quite a collection of artists, old and new: Billy Bragg, James Yorkston, Damian Dempsey, The Unthanks, Christy Moore, Eliza Carthy, June Tabor, Juldeh Camara; there’s even a closing track from Shirley and Dolly Collins, a reworking of a traditional arrangement by The Copper Family. Naturally with any collection of this size and scope, it’s a bit hit and miss (which might be as much to do with my ignorance of some of the artists) and despite the nature of the project there isn’t really an overarching theme amongst the material – it’s more a collection of songs for a cause. But it is a very strong collection – and with material as good as that of the The Unthanks’ ‘Nobody Knew She Was There’, a keening soft pillow of a track, the mighty Lau with their spacious take on folk, the stentorian Damian Dempsey raging out ‘Colony’ and the traditionalists such as Blowzabella and the aforementioned Collins sisters this shouldn’t struggle to sell.

You have to acknowledge that this is a genuinely worthy cause, and a collective with this much publicity can only work for the good; and we know that given the backing and the manpower that its easy to puncture the imbecility of the BNP – witness what happened in Barking and Stoke at the general election. Hopefully it’ll sell by the bucketload. What of that insidious and latent bigotry though? That pall of ignorance that seems to have become something of the norm in this country – all that smug Clarkson Littlejohn halfwittedness that seeps into things, where everything seems to be the product of middle-aged men who TELL IT LIKE IT IS, people who remain free of nuance and misunderstand pretty much everything. Whether it’s intentional or otherwise is pretty much a moot point, if you act the part for long enough and you become that part. The question seems to be: how do you battle such an ominous creeping vapidity and apathy?