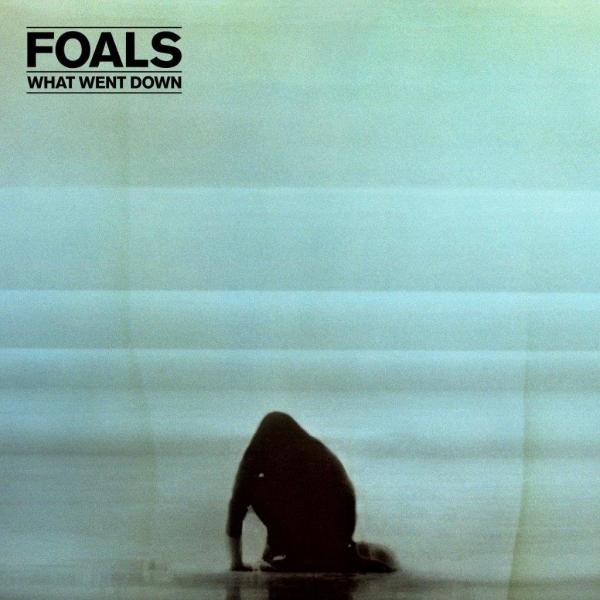 Where we’ve arrived at with What Went Down has, in hindsight, loomed on the horizon ever since Foals abandoned their schoolroom stenciled motif of their 2008 debut, Antidotes, for the simple, yet brash, Impact-leaning type that has emblazoned each album since.

Interestingly, Foals’ album titling logo has also been removable since 2010’s Total Life Forever, as a sticker on the cover or part of the album’s exterior wrapping. It’s as if to say, “HERE IS A FOALS ALBUM” once, so you notice it, then never again because you’ll never forget it. This towering inevitability rooted itself in patchwork across that capricious sophomore outing and fully metamorphosed on 2013’s muscular and moody Holy Fire.

As if “Inhaler”s cyclonic chorus and “My Number”s titanic swing last time out didn’t make their stylistic points vociferously enough, the opening one-two punch of What Went Down’s title track and “Mountain at My Gates” slingshot the ante skyward.  If the amps were previously at 10, they’re now clearly at 20; accordingly, frontman Yannis Philippakis’ formerly agitated yelp has become the canyon-etching roar Foals’ beefed up sound demands it be.

Philippakis had admittedly cast his lyrical gaze inward on Holy Fire, uncovering an emotional claustrophobia, where he felt he “can’t get enough space”; What Went Down turns that imploring stare out at the world, where Philippakis finds no solace, but only confirmation of what he’s been feeling within. In a nod to Holy Fire’s furious “Providence”, the title track recognizes the animalistic brutality of our current state (“when I see a man / I see a lion”), while “Snake Oil” addresses its titular allusion to the sleazy, opportunistic deception permeating society.

If Philippakis is trying to escape the prison of himself by running elsewhere, he’s not getting far – there’s “a mountain at [his] gate” and he’s “on a red-eye flight to nowhere”. In perhaps what is a psychic coincidence, What Went Down’s penned in allusions are more than just a commentary on our general feeling of mental oppression borne of our bombardment by minutiae and frivolity these days, but a tangent to Philippakis’s ancestral homeland, Greece’s economic woes, leaving their citizens bound by empty ATMs and bare grocery shelves.

Musically, where What Went Down most draws from is that pivotal second album. Having abandoned shifts in dynamics and tempo on Holy Fire to evidently focus on atmosphere and scaling their sound, Foals have it both ways here, which is What Went Down’s chief creative virtue. Just as Total Life Forever ebbed and flowed between the subdued “Alabaster” and the groove-laden title track, so too does Foals here, from the soaring ballad “Give It All” to the bloozy (and clunky) “Snake Oil”, albeit with peak grandiosity oozing and gushing from every pore.

Of course, any talk of colossal inevitability leads inevitably to the spectre of major label–fashioned arena rock. Lesser bands have blown off what critical legs they at one time stood on wading into this mine field. For now, Foals gets by on the cathartic authenticity of their earnestness and the vestiges of their oblique roots to avoid the hollow skyscraping construction of bands such as Kings of Leon or bankrupt creativity of another huge band sporting an inescapably enormous logo.

While not a step forward, What Went Down is a consolidation and refinement of Foals’ artistic strengths and explorations over their previous trio of albums. Yet, after dashing and long-stepping their way from squawking math-rock curios to, at once, hulking but limber rock titans, Foals has reached a precipice. It’s not difficult to see certain harm peering over the edge, though the veneered beauty of the scenery below may prove too enchanting to pass up.

Philippakis insists whatever Foals’ future may be, it will be “much different…this is the end of a chapter.” If true, good thing, lest the band fall victim to themselves as their own snake oil men.