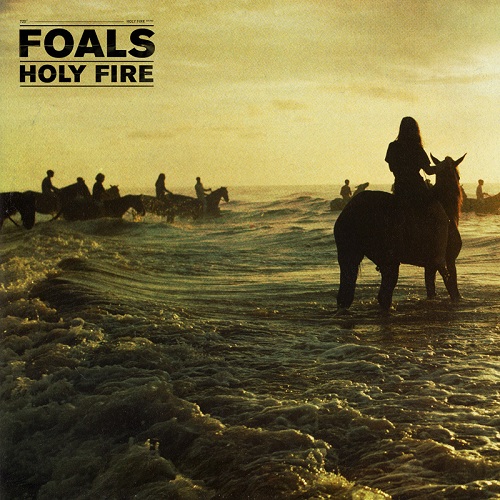 Once you’ve attained a certain amount of attention and acclaim, expectations become rife. Because of this, established artists have to defend themselves from two contradicting assumptions that music critics hold very dear. Firstly, that possessing a back catalogue that is static and free from any kind of artistic exploration is tantamount to blasphemy. Second, that a catalogue that oscillates between sounds that have absolutely nothing in common from album to album attacks the very core of the band dynamic – that some element of continuity is fundamentally important to survival.

The modern, successful band must learn to balance these two laws. And for a moment when Foals released the promotional track for their third album Holy Fire, it felt as though they had not quite managed it. Upon hearing ‘Inhaler’ for the first time, it sounded almost alien and unfathomable. That’s not say it is a bad track, in fact the opposite. With its soaring Rage Against The Machine-like soundscapes and Yannis Philippakis’ pleading vocals that seemed to mark a new-found confidence in his singing abilities, it was at first as shocking as it could get. Again, the album’s next single ‘My Number’, which possessed the kind of lyrical transparency, found on any good pop song of the last 10 years or so, didn’t seem quite like them. When they started out, they’d been at the fore of the in the so-called math-rock community when they released their debut album Antidotes, and then with Total Life Forever - striking out without the background support of momentary fads – they’d become more meaningful. With their latest album it’s glaringly apparent that a little something has changed.

Still, a real plague of confusion confounds the listener – one that could only be quelled by an in-depth dissection of what influenced the band – an opportunity that isn’t afforded to most; something like when Arctic Monkeys released the Josh Homme-laden track ‘Crying Lightening’ from, coincidentally, their third album Humbug or when The Strokes released ‘Juicebox’ from, coincidentally, their third album First impressions of Earth. Or is this a coincidence at all? A lot of time is spent on talking about the “difficult second album” but what about the third? The one that sees the band not quite struggling for relevance, in fact the exact opposite – quenching their inherent artistry, finding a way to project how they’ve changed as individuals or how their likes and dislikes have changed without alienating their core fan base. This becomes increasingly difficult under the shadow of expectation.

Yet the confusion dissipates once you look at the growth of Foals through the band’s continuities as much as their changes. Take a song like ‘Bad Habit’. If you remove its atmospheric layer, you’ll find the same kind of textures textures that were rife on their debut album, just with more subtlety. Not exactly a courageous departure but one that manages to establish a proper balance between the past and where they are now.

‘Late Night’, with its ebbing and flowing, references the similar crescendo to Total Life Forever’s ‘After Glow’, but again it manages to sound much more purposeful, as if perhaps they now have something more to say. When Yannis cries resolutely, horsely “Oh now mama, do you hear my fear, it’s coming after me, calling out your name”, it feels affecting and real – and it’s pertinent to say that Total Life Forever was itself a body of emotion.

One thing that the group have left behind is the opaqueness that clouded their previous album, suggesting that with their newfound transparency has also come confidence. ‘Milk and Black Spiders’ is a classic love pop song, and there is something very traditional about the lyrics this time round. “I’ve found that you’re my only friend indeed”, sings Yannis resolutely. When compared to songs like ‘The French Open’ or ‘Two Steps Twice’ from the debut, Holy Fire, with its lack of metaphors, is much less hard to decipher. What they stand for is crystal clear: never have we as listeners been closer to understanding what Foals mean.

Yes, most of the reviews you’ll read about Holy Fire will say that the band has changed. But in fact, what is important are the elements of continuity that tie all three records together. Holy Fire is Foals’ masterpiece because it ties in the rhythmic nature of their debut, the soul of the second album, producing finally the rhythmic soul of its own.