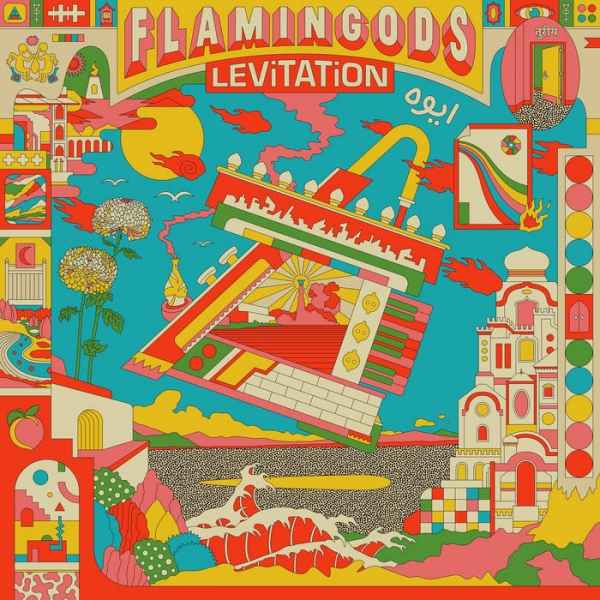 When psych became a thing again, it really connected, and with everyone.

But, let’s face it, so much of it was an approximation of the past for the streaming generation, a pastiche as best. As nice as it is it lacks the world, and consciousness, exploration that changed rock music forever the first-time around.

You can tell most acts never left the rehearsal space, never mind trekked sub-continents on journeys of self-discovery. This isn’t the Beatles in India, this is a new band from Slough listening through Spotify’s This Is Psych playlist and copying it for radio play.

The antithesis to this malaise, Flamingods has always stood out as a more interesting prospect.

A collision of worldly cultures – Bahrain childhoods, London living, past abodes in Italy, Dubai, Albania and Saudi Arabia, augmented by Muslim, Christian and Jehovah’s Witness upbringings – Flamingods’ explosive psych-driven aural patchwork feels like something worth exploring in concept alone. Over three albums and two remix efforts, nothing has stayed still in the world of Flamingods.

New album for Moshi Moshi, Levitation, is another departure. While previous album Majesty washed itself in downbeat tones, even veering off into exotica territory, Levitation elevates the band's underlying funkiness and penchant for danceable rhythms. This is Flamingods in party mode.

“Paradise Drive” is a compulsive indie-dancefloor filler with the standard chiming psych-guitar smashed in by electroclash beats. It runs the risk of being a Kasabian off-cut, but thankfully avoids that trap. Yet this is what makes Levitation a fascinating prospect. While it clearly revels in its funk, afrobeat, disco and psych-pop influences, it delivers these ideas in a way that Radio X listening, “real music” fans will not struggle to understand. Take “Koray”, which after a short burst of space-synth wonderment, propels itself with Stone Roses swagger, supplemented by omnipresent percussion and squelching synth hooks.

But the Dad Rock introduction to psychedelic world music this is not. While the access points are fairly universal, Flamingods drag the listener down much deeper.

Doused in the kind of mysticism that drenched the original psych scene, oblique lyrics about being the sun and a cascading approach to influences, Levitation still manages to retain a lot of the expansive wonder that so much modern psych has neglected. Levitation is an international exploration of genre that condenses it all into a mainstream-friendly whole. This takes confidence and cohesion, which could be explained by the fact that this is the first time the band members have all resided on the same continent in years. This sounds like a band singing from the same hymn sheet (and other such clichés).

It might not permanently etch itself on your psyche, but while it plays it will take you on a wonderful genre journey, draw you in with its more accessible hooks and urge you to get out to sweaty dancefloors. What more do we really need than that?