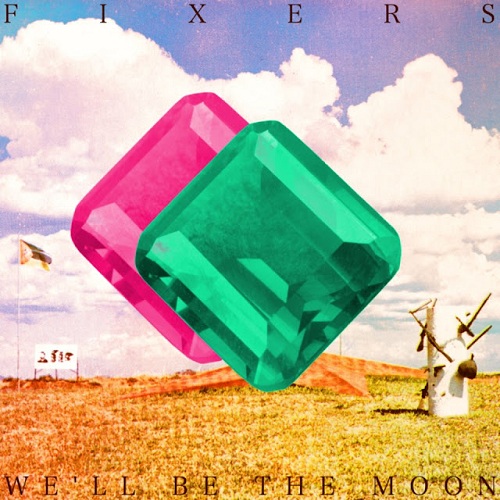 For as long as it has been on the cards, the idea of a debut album by Fixers has been exciting and perplexing in equal measure. While a string of justly hyped singles and EPs introduced to us the Oxford band not unreasonably described as “an avant-garde take on the Beach Boys”, it increasingly seemed that it might be a struggle to adequately capture their dizzying, rapidly-evolving psychedelic pop sound in the LP format. Here is a band, remember, that admitted becoming bored by their own EP in the four weeks between recording and release – how would they feel about not only freezing in time a much larger portion of their work, but then also having to wait for months while it navigated the complex machinery of a major label? An answer is no closer now that the wait is over, but one thing is clear: that if Fixers are bored by We’ll Be the Moon, they’ll be the only ones.

Recorded at London’s RAK Studios with producer Nathaniel Lennox Jr. and mixed by Alan Moulder and Dan Grech, We’ll Be the Moon has seen Fixers take advantage of the resources offered by their deal with Mercury Records. Accordingly, this is a fairly accessible and bright-sounding first LP, which eschews some of the more explicit experimentation of last year’s Imperial Goddess of Mercy EP. Instead, established early Fixers highlights ‘Crystals’ and ‘Majesties Ranch’ return to join newer album tracks still pulsing with the influence of Japanese pop, ’60s psychedelia and the band’s distinctive surreal euphoria. Within a few tracks, the idea of a Fixers LP suddenly makes perfect sense; by the time We’ll Be the Moon is over, it has proved itself the natural extension of everything the band has done so far.

One of the things which makes all this so irresistible is the palpable joy and optimism exuded by almost every moment of every song: by remaining consistently shimmering and upbeat without ever losing flow or becoming exhausting, Fixers have crafted a possibly peerless album for the summer. The still-gripping sugar rush of ‘Crystals’ is joined by the confetti pyrotechnics that are the climax of ‘World of Beauty’ (“welcome to my space age”, Jack Goldstein cries appropriately), and almost matched by the tessellating synths and chants of the similarly hectic ‘Pink Light’, which during one break seems somehow to speed up and slow down at the same time. Each track is so intricately layered that close listening always unearths something subtle and new – even the relatively low-key arrangement of ‘Amsterdam’ conceals a live-wire guitar that lingers only for a moment, and Jason Warner’s bass work in particular is often more crucial than it first seems.

Packed with references to far-off places on Earth and beyond, We’ll Be the Moon feels like a journey. History teaches that even the best musical trips can lose momentum near the end, and it can feel that for all their heady psych-pop invention thus far, Fixers might yet fall into the trap of the anticlimactic finale. Thankfully and to the tremendous credit of the band, We’ll Be the Moon concludes with a pair of tracks which may even be its crowning glory. Each building up slowly from a slow, stark base ‘Really Great World’ and ‘Good Night’ each end in a grandiose fashion befitting the real distance travelled across the record. The latter is simply a delight – significantly reminiscent of mid-’70s peak-era Queen, it strips away all of the electronic elements in favour of ringing acoustics, Goldstein’s best vocal performance and a group sing-along which brings the album’s loose celestial theme full-circle, all stars and suns and gaping black holes into which a fading organ eventually drifts.

All said and done, We’ll Be the Moon is the stellar and coherent statement of intent from a band who entirely deliver on the heavy weight of hype and promise built up around them during their short existence. Drawing together strands from rock, dance, electronica and the avant-garde and packaging them to a record that is both distinctively Fixers and worthy of a huge audience, We’ll Be the Moon should be regarded as one of the key British albums of 2012.