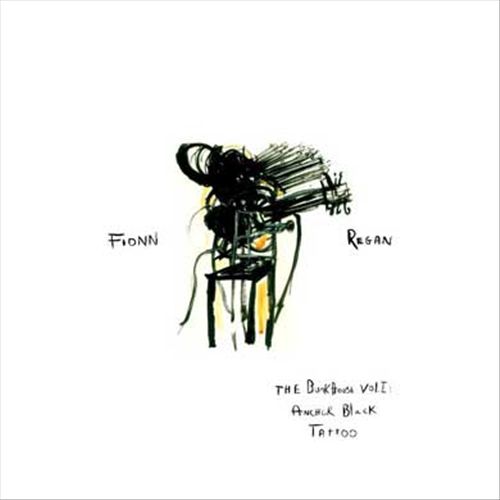 Sometimes music is best stripped of all decoration, down to its bare bones and presented to us honestly. There comes a time when it’s the understated outliers that become our saviours in the quest to hear something unflashy but artistically pleasing. This is where Fionn Regan resides: The Bunkhouse Vol. I: Anchor Black Tattoo retains an aesthetic with a rawness that is intrinsically natural.

There’s a pattern emerging within Fionn Regan’s blossoming discography and it’s one that underscores an unobtrusive disposition. From his prominent 2006 debut The End of History to its disparate successor The Shadow of an Empire, Fionn has managed to demonstrate a sincere, contemporary understanding of folk music without adhering to the usual singer-songwriter/man–with-guitar formula. Although The Shadow of an Empire and 100 Acres of Sycamore were perhaps slightly more elaborate in their compositions, Fionn operates best in a world where minimalism, melody and poetic discourse rule over florid instrumental arrangements and lofty production.

Recorded using just a single microphone and a 4-track in his Bunkhouse studio, Regan’s fourth full-length sees a continuation of his ability to create subtly beautiful and affecting records. There’s a particular loneliness to this sort of arrangement, which evokes a solitary atmosphere where Fionn’s rhythmic soliloquies are much like previously untold stories and laments that were just waiting to be recited, not for empathy, but for solace. Beneath this ornate imagery is a distinct earthiness to the recording background hiss; the minimalist production gives you a sense that, despite the overall bleak narratives conveyed, there’s a noticeable calmness to each track that is catalysed by the peace and tranquility of the Bunkhouse’s remoteness. This is his most unembellished record to date and the simplicity of its craft also allows room for imperfections; there’s a real beauty to an album that isn’t afraid of exposing any blemishes, an authenticity that creates an alliance between the listener and the artist on the other end reaching out and baring all.

There’s a melancholic warmth to this album that mirrors familiar facets we found in The End of History. It’s also a vast, noticeable deviation from the sonic shift into electric à la Dylan on Shadow of an Empire; Fionn Regan has gone back to basics, and it serves him well. One thing that remains intact is his wistful eloquence where rhyming schemes range from charmingly basic to pensive and esoteric. There’s a wonderful juxtaposition between the genteel guitar plucking and the often doleful lyricism that accompanies it. Having said that, ‘Mizen to Malin’ contains a dark mystique where Regan’s guitar paces into a brooding, funereal march. On this same track, Regan touches on Ireland’s recession, but it’s more like a maritime monologue than a political discourse. Imagination takes over as he softly sings “Just then the Irish Sea spoke, there’s a reason this country is broke”. The illusive imagery creates a reverie-like joy to an otherwise sullen subject matter.

The album concludes with the hushed ‘Moving to Berlin’, which, along with the Cohen-esque ‘Carla to Calary’ produces an underlying theme of journeys and escapism, the narrated dialogue as poetically engaging as it is organic and elemental.

Fionn Regan’s gift for melody and turn of phrase is at the forefront of this album, and there’s only one real disappointment to be had here: the brevity of the whole thing. With just a mere 26 minutes forming its contents, you’re left wanting to know more. On the other hand, it’s the short, creative simplicity of The Bunkhouse Vol. I: Anchor Black Tattoo that makes it so special.