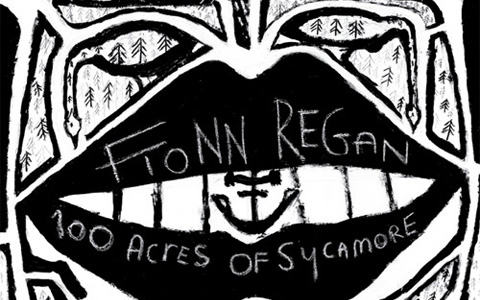 Owing to journalists’ predilection for the lazily conceived but easily grasped point of reference, Dylan comparisons are generally all too easy to make. OK, so his indisputable, perhaps unparalleled, influence is a factor – but few examples really withstand scrutiny. Fionn Regan has exhibited a greater resemblance than many others (The Shadow of an Empire‘s magnificent title ballad was truly Dylanesque) and Regan’s switch from Mercury-nominated lyrical minstrel to turbo-charged electric rock-and-rollick on that album raised eyebrows and mock cries of “Judas”.

On his third full-length release, Fionn Regan shrugs off this albatross with aplomb. His evasion is neat enough – sidestepping the stomp of the last LP in favour of the sashaying perambulations of 2006′s The End of History. Though the sound is richly embellished, 100 Acres of Sycamore recaptures that same mellow mood, informed again by acoustic intricacies, lyrical pluck and folk guitar finger picking.

The biggest difference is a preponderance of ornamental strings that Nick Drake might have appreciated (there’s another slack association). These arrangements are put to fine use; opening the album, the title track gusts and gushes with a grandiose but somehow understated power. Regan towers above as master and tamer, urging: “Rise up from the trappings of flesh and the holdings of skin… from the pack who are baying and drawing your blood”. There’s something primeval about these words, his warnings of “those weasels and weeds… waiting to jump us” and the cloistered vastness that cocoons and protects, intense and secure – so much so that his entreaty to “text me or bell me” seems anachronistic and prosaic. Here is an opener with the elgeant orchestration and ancestral ache of a windswept Unthanks track.

This sense of the wild and wilderness, tousled but tamed like it’s Regan’s domain, is in the veins (and titles) of 100 Acres of Sycamore. On ‘Sow Mare Bitch Vixen’ – “I’ve always had a thing for dangerous women”, Regan reflects, with a blunt, wry tenderness, bass notes rolling around like a bicycle tyre. There’s always mature expression in the lyrics’ allusions, smart but not showy, acute but not pointed. ‘The Lake District’ uses the National Park as a metaphor for a lover but also includes more mortal imagery that is just as beguiling: “Take my hand and we will waltz / All over the cathedral vaults / Spinning / Like a foreign film reel”.

The contrast between the enduring and the ephemeral in this intertwining of the natural world with human emotion emphasises the aching frailty that hangs around his gentle, contented tones. Adding his olden folksy hush, the effect is a little Pecknold-ish on occasion, while ‘For a Nightingale’ is distinctly James Taylor at times. Regan’s writing has always been bold and his singing pure – both exuding class – but together here they are lush, luscious and lustrous, infused with profuse but peaceable sentiment.

That said, the album could have done without the undoubtedly overlong ‘Vodka Sorrow’, which, from the third minute onwards, consists vocally of only these two words, repeated in varying tones of drink-drenched droning misery. That he manages to make it sort of work at all, if permitted the scope to experiment that artists earn over years, is something – but the concept would have been as well served by an excerpt closer in length to the similarly repetitive, redemptive ’Golden Light’.

Soft and stirring, 100 Acres of Sycamore sees Regan’s return as a folky songsmith, making heavenly music that, like Fleet Foxes, is in tune with his place on the planet. Suspicion that such awareness may have led, in a more cynical sense, to a comeback album contrived as a response to the criticism of his second record seems unfair, at least in that he sounds so innately comfortable in this music. The songs exert an almost gravitational pull – slow, weighty, deep and rich – without becoming ponderous. I can’t deny that I find this album highly winsome, offering a fine line in love songs and, beyond the natural beauty, a silken sheen of sentimentality. “On your list of distractions are there stars beside my name?” he asks, quaintly, but this album is pretty rather than twee, making for an exceedingly pleasing listen.