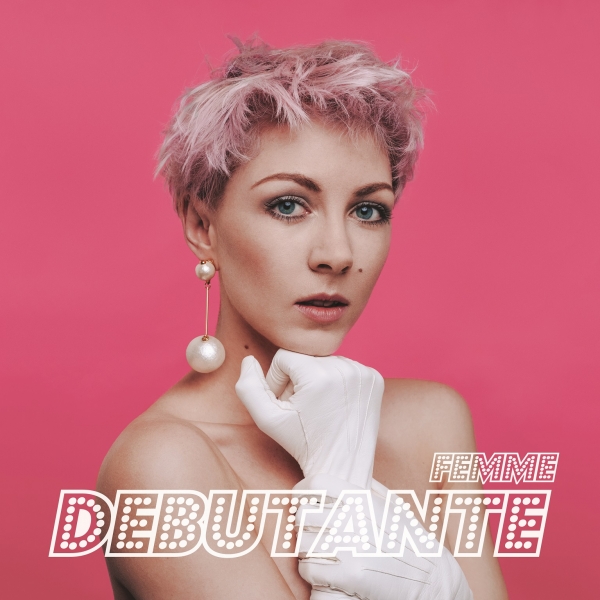 Self-determination is an admirable trait. It’s especially admirable in today’s free-for-all musical climate, despite some shifts in the consumer model, for an artist not to bite the hands off major labels for maximum exposure.

Step forward one such purveyor of perseverance: FEMME, a one-woman powerhouse of pop who's shirked big label leg-ups in favour of preserving her own artistic vision.

The London-based soloist has been writing, producing, directing, and performing her fun, bass-heavy alt pop of her own accord for the last few years. Touring with Charlie XCX in the US, sync spots on Made In Chelsea, and fashion shoots for Uniqlo Japan (not to mention Ultraísta, her fantastic 2012 experimental collaborative project with Radiohead producer Nigel Godrich) have seemingly come as pay-offs for her own efforts in working hard to get her music heard.

Thus FEMME's self-released first album, Debutante, is an aptly-titled statement of intent: here I am, this is my art, and you're in for a thrilling ride.

What better way, then, to open the album with a medley of those years that delivers on such promise. Vocal snippets of messages from apparent acquaintances and fans worldwide ("this is FEMME", "tonight's going to be wild", "hola, Bullet Girl") suitably set the scene and build the hype. But there's one crucial factor. The cacophony comes to a halt with a rather bizarre Toy Story quote that doubles up as the song's title: "You Poptarts Are Ready!" FEMME may take herself seriously, but not too seriously. And that light relief signals the ensuing 30-odd minutes of unabashed fun.

First track proper and one of the three singles released in the run-up to Debutante's release, "Fever Boy", is a short and sweet two minutes about being young, free, and open to the possibilities of new love. Make no mistake about it though, if FEMME is going to be caught "all night-long" in lustful fever then it has to be on her terms. "You don't push my pages/you haven't loved in ages/I'm on a mission to change your mind/tell me what's your name", she sings over frizzy synths, urgent off-beats, and playful call and response.

"Romeo", too, is a satisfying nugget of pop, this time introducing FEMME's renowned love of Afrobeat and Afropop. Its syncopated, dubby rhythms bounce beneath fairground synths and lyrics that detail female camaraderie and a night on the pull. An unconventional change in tempo at the chorus is an early example of why FEMME deserves to be heard. This is pop with a twist; pop with the kind of creative intelligence that's sorely lacking in the charts.

Other creative curveballs appear on tracks like "Gold" with its dramatic key changes. It's the song that most obviously harks to FEMME's other love of western (as well as the aforementioned west African) '60s pop with its assertive lyrics and 24-carat diva harmonies.

Debutante's common thread of sound and themes - big bass and beats over '60s / '80s pop-indebted stories of heartbreak, lust, love, feminism, and fuck-yous - are quick to spot across songs that have enough musical variety to not turn stale.

Take "Double Trouble", for example. It hears FEMME contemplate the fate of a friend with "others" in his bed, the track's sensual vocal lines and downtempo beats devoid of the earlier tracks' rapid rhythm pop. Also see the ballad, "Localuva", which brings sitar and guitar into the mix as well as touches of lyrical darkness to the record's overarching light. "How was I to know that you were just letting me go to rust?" she sings with crushing believability.

It's important to note at this stage that Debutante's lyrics could well be pure fiction. They could be retellings of others' stories. They could be a complete mixture of personal and impersonal experiences. But with FEMME's enviable penchant for writing gut-punching pop with substance, it's hard to not imagine at least some of the record's songs as self-referential.

Despite possessing such substance there are, however, a handful of less tolerable tracks such as "Shout Out Loud" and FEMME's latest single, "Light Me Up".

"Shout Out Loud" indulges too much in the type of vacuous, irritating dancehall-inspired synth-pop that's been clogging up the airwaves in recent memory. The less abrasive "Light Me Up" is an improvement with its more intricate, syncopated rhythms and considered mechanisms of build and release, but both tracks sadly pale in comparison to the others.

Instead, FEMME's most accomplished writing comes in the form of the incendiary "S.O.S". Sporting the most explosive, sassy chorus of all - the lyrics "My S.O.S B-A-B-Y baby/are you 'gonna save me/or are you just gon’ stand there?" booming over thick thuds of synth and trigger-sharp beats - "S.O.S" is the album's pivotal point; the album's surefire highlight.  Here, FEMME is seemingly the torchbearer for women embroiled in hindering relationships ("all the loving in the world couldn’t stop me now/cause I’ve got some territories to see/ [...] I’m not stopping for anyone") and we want to join the march.

Perhaps her most outwardly feminist ditty of all is the superb "Dumb Blonde". A simple, but fantastic song helmed by a lopped drum machine pattern and snap-happy claps, FEMME tells her patroniser "you treat me like a right dumb blonde/but I'm gonna show you how it's gotta be done" with powerful deadpan delivery. Better still is the bridge where ethereal synths beef up the track's skeletal backbone, allowing the listener to digest its points.

Debutante is a brilliant collection of songs that marries the diva pop of decades past with the Afrobeat resurgence of decades new, cleverly shot through with social commentary and style. FEMME should be proud of what she was determined to achieve; we've certainly had a thrilling ride.