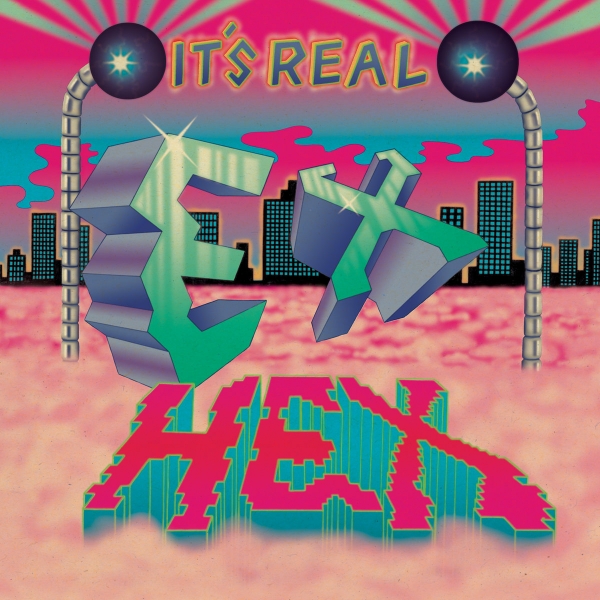 There’s some clear irony in Ex Hex’s latest LP’s title, It’s Real, given the primary premise of the band existing as a send up of bygone rawk aesthetics.

The other side of that coin, fortunately, is, just as with the band’s debut Rips, their sophomore outing transcends mere derivation to play with such honest-to-goodness authenticity that Ex Hex could easily be filed right alongside their obvious blueprint influences of turn of the ‘80s power pop and new wave.

It’s Real displays the same exuberance and professionalism – not to be taken as a dirty word here, but as testament to the band’s seemingly effortless knack for arrangement and execution – as its predecessor but adds a handful of different moods and textures. Mood, in fact, is an operative word for It’s Real for, while Rips burst with incessant, riff-laden joy, there are brooding undercurrents to several of its songs.

Mary Timony’s “Good Times” is actually about anything but, its minor key bridge driving home its message of isolation felt in personal relationships while the ghostly, multi-part “Medley” acquits itself as Timony’s dusky homage, not to the band’s forbears, but to their own past lives spent in more recent eclectic bands such as Helium, The Aquarium, and The Fire Tapes.

Bassist Betsy Wright offers a pair of more tangential stylistic diversions in the arena-metal charged “Rainbow Shiner” and “Another Dimension,” which sound like the mid-‘70s fist-pumpers their titles would suggest. They also reiterate Wright’s power chord-driven stomp she delivered as one-half of Bat Fangs on their 2018 debut, albeit on a grander scale, which is a quality found across It’s Real with regard to Rips as well.

It’s Real accomplishes the one thing anyone would have questioned of Ex Hex after their debut – could they and would they expand their palette on their next outing, if there would even be a next outing. Having ticked that box with aplomb, one can plainly see this trio can knock out ear candy such as this every few years without batting an eye…

And I can see us gleefully stuffing our faces with it every time.